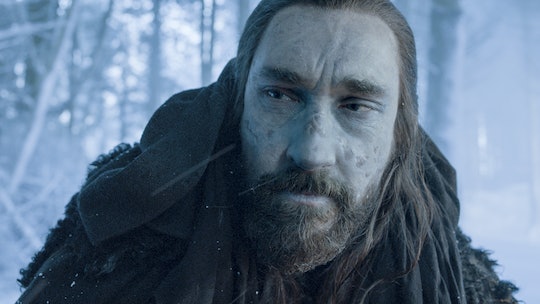 Uncle Benjen is two-for-two now in saving his nephews from certain wight danger, but for the first time he may have actually had his on-screen death confirmed during Sunday night's episode. So is Benjen Stark really dead on Game of Thrones? The first time he was declared dead back at the beginning of the series, there was no body and enough mystery surrounding it to assume that he’d be back.

When he did in fact return in Season 6 to save Meera and Bran from a horde of wights, viewers finally found out what happened to Uncle Benjen on Game of Thrones. Unlike most of what fans have seen of the undead so far, Benjen was a partially turned wight. According to the story he told Bran and Meera, one of the White Walkers stabbed him with an ice sword and left him for dead. The Children of the Forest (who, if you recall, made the Night King way back when) saved him by doing the same thing they did to the Night King and plunged dragonglass into his heart.

"The great war is coming, and I still fight for the living," Benjen told Meera and Bran. "I'll do what I can... as long as I can." When he swooped in to save Jon just like he’d saved his other nephew the previous season, Benjen didn’t look particularly worse, but he also forced Jon to leave him with the crowd of wights to fight them off alone.

Even though we still didn’t see an official death for Benjen, he was outnumbered and that fiery ball and chain can only do so much. Wights and White Walkers take a lot more than a simple stab in the gut to kill them. As for Benjen, I’d expect it to be equally as difficult to kill him now that he’s no longer human, but with the amount of wights crowding in on him, it may have been the swift and not all that satisfying end of Benjen on Game of Thrones.

As Jon rode off, he watched as Benjen got in a few good hits, but the small army of the undead overpowered him to the ground. We’ve seen that wights can be killed and that some might even become skeletal versions of their former selves over time, but Benjen has already been slowly decaying and chances are, the wights ripped him apart.

If Season 7 is going to cover the biggest battle yet with the Night King’s army, there’s only so many times Benjen can come in to save the day, so as sad as it is to say, he’s probably served his purpose on Game of Thrones. It wasn’t the farewell to Benjen that fans deserved, but he did go out helping those on the side of good and as he told Bran and Meera, that’s what he wanted to do before his days were up.