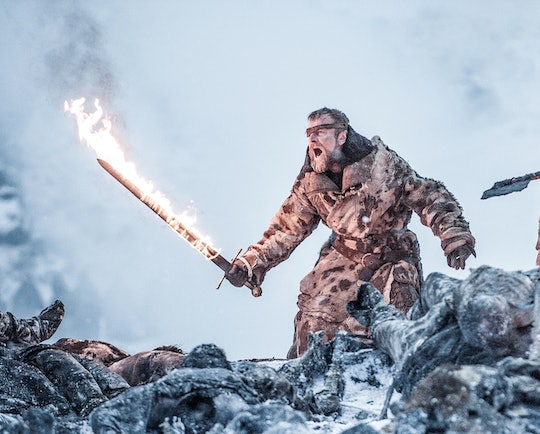 Has Lightbringer Been In Front Of Our Faces This Whole Time, 'GoT' Fans?

This season, Game of Thrones played a lot into the Prince That Was Promised theory, even going as far as to suggest that it might be a "princess" instead. Either way, the figure in the prophecy is said to wield the magical sword Lightbringer and since it’s been difficult to ignore the flaming weaponry used by the Brotherhood Without Banners, fans might find themselves wondering: is Beric’s sword Lightbringer on Game of Thrones? Here's what we know right now.

The prophecy of Azor Ahai states that the Prince That Was Promised will brandish a sword called Lightbringer, which is basically on fire all of the time. Or, at least hot enough to be used to kill enemies more easily, including wights. But since Beric’s sword, and even Thoros’ before be died, were both lit up and then easily put out by the men, it’s safe to say that Beric does not own Lightbringer. There is still some magic behind it, though.

In the books, Thoros is said to use a bit of wildfire each time he ignites his sword, but Beric’s flaming sword is made in a totally different way. Since he’s been brought back to live multiple times thanks to the Lord of Light and Thoros being a red priest, there’s a belief that Beric was given some abilities to help him accomplish whatever he’s still alive to do.

In A Storm of Swords, Beric uses his blood to set his sword ablaze each time and since viewers saw him do it in Season 3 on Game of Thrones, it seems like he uses the same technique on the show at times. The way Beric runs his fingertips over his sword right before it lights up indicates that his blood is used to set it on fire for battle and even though it doesn’t necessarily mean Beric is Azor Ahai, it does make him important in the battles to come.

As he’s said more than once on Game of Thrones, he was brought back over and over for a reason and since his blood enables him to set his sword on fire at times when he fights, clearly his purpose is to help defeat the White Walkers and army of wights.

In a recent interview with The New York Times, Richard Dormer (who plays Beric Dondarrion) admitted that the Lord of Light is the reason for his flaming sword, as opposed to anything else. "I don’t want to give away too much, but it’s actually the Lord of Light who makes it go like that," Dormer said. "The reason Beric used blood to set the sword alight in Season 3 was that it was a trial by combat, a trial being judged by God. But actually, Thoros and Beric don’t need to use the blood. They just say a prayer."

I have no doubt that Beric has an important role to play in the big Game of Thrones battle to come. But I think it’s clear that having that fancy sword trick does not make him Azor Ahai and does not make his sword Lightbringer.