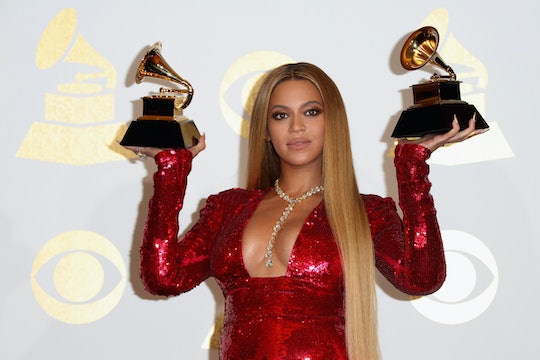 Don't Panic, But Beyoncé May Be A No-Show At The 2019 Grammys

Any awards show Beyoncé shows up to is bound to be a good time. The mom-of-three has an incredible stage presence, a killer sense of style, and she knows how to have fun. Given all of these qualities, it's fair some fans want to know whether Beyoncé is going to the Grammys on Sunday, Feb. 10. Unfortunately, there's a good chance she won't attend because she isn't competing for any awards this year.

Beyoncé did attend the 2018 Grammy Awards that took place in New York City. The 37-year-old songstress, in true superstar fashion, arrived to the ceremony late, according to HuffPost. Beyoncé also showed up with 7-year-old Blue Ivy and JAY-Z by her side, the latter of which happened to be nominated for eight awards that year, according to People. Considering JAY-Z had a big night that evening, it's no surprise she showed up to lend her support.

As for 2019's event? The Beyhive shouldn't get their hopes up for a few reasons. For starters, neither Beyoncé or JAY-Z are nominated for awards this year. It's a bit of a snub considering the two released their surprise album, Everything Is Love, in June 2018, according to NPR.

Everything Is Love was the third album in a trilogy about the ups and downs of JAY-Z and Beyoncé's relationship. Beyoncé got to tell her side of the story in Lemonade, while JAY-Z gave his response in 4:44. Everything Is Love, however, was a joint effort.

Many fans argued that Everything Is Love deserved a nomination, a sentiment that's understandable given the Beyhive's love for JAY-Z and Beyoncé.

"Everything is love was snubbed but we are used to this bc the Grammys always snub the carters," one person tweeted.

Another said, "Everything is love was snubbed but what’s new. The Grammys don’t acknowledge talent so I can’t even be disappointed anymore."

"WHERE IS SWEETENER? WHERE IS REPUTATION? WHERE IS QUEEN? WHERE IS EVERYTHING IS LOVE? I’M SO CONFUSED," another tweeted.

Oh, and I did I mention JAY-Z didn't walk away with any Grammys in 2018 despite his eight nominations? I think it's safe to say JAY-Z and Beyoncé probably aren't going to shower the award show with love following these supposed snubs.

Another factor in Beyoncé possibly skipping the event is her seemingly low-key schedule for the next few months. After a busy few years (giving birth to twins in June 2017, going on tour from June 2018 to October 2018, performing at Coachella in April 2018, releasing a new album in June 2018, etc.) it would be reasonable for the singer to invest in some downtime. Instead of showing up to the Grammys, Beyoncé should hang out at home and order Postmates instead. She deserves it.

Of course, there's always the chance that Beyoncé will show up and delight us all. The performer could attend out of support for her friend Alicia Keys, who is hosting the event this year. Beyoncé seems like a ride or die kind of person, so I wouldn't rule this possibility out.

The final verdict? Fans will have to wait it out for Sunday to see whether or not Beyoncé makes an appearance.