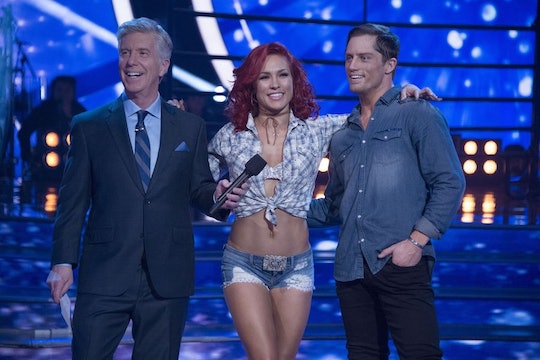 'DWTS' Fans Are Already In Love With Bonner Bolton

Among the reality TV stars and show business personalities that have been around for decades, Season 24 of Dancing With the Stars has thrown in some wild cards, like Bonner Bolton, the professional bull rider/model. Because yes, that’s a thing. But after his super sexy cha cha with partner Sharna Burgess, fans are probably asking: is Bonner Bolton single?

Dancing With the Stars fans are definitely already loving the southern gentleman type who survived a broken neck to be able to compete on the show in top form. There’s no denying that the duo’s first performance on opening night was full of sexiness and an obvious chemistry, which was apparently enough to ignite dating rumors already but, according to People, Bonner is single.

He told Entertainment Tonight: "I am absolutely single," immediately shutting down any of the dating rumors that are already circulating. He went on to say of his dancing partner, "She’s really good to get along with. We actually have a lot in common. I think our personalities are real similar, but that can make it kind of challenging too sometimes." It definitely sounds harmless enough, but there’s still plenty of time for the pair to strike up something more than simply a professional relationship.

Because of the intimate time spent between the professional dancers and their star counterparts on DWTS, it’s only natural for fans to assume that something more goes on between some of them. We’ve all seen Dirty Dancing and sometimes it’s OK to believe in a real life Johnny Castle.

And, like I said, the chemistry between Bonner and Sharna on the very first night was hard to ignore, but that’s probably just because they make a good team on the dance floor. They scored a total of 22 points during their premiere performance, which wasn’t a perfect score by any means, but for their first time, it certainly was a decent starting point.

When ET asked Bonner about his relationship status, Sharna was quick to add that she too is “absolutely single" as well. But since they’re both single, who knows what could happen? And clearly, the fans are already head over heels for the bull rider.

If Bonner and Sharna started dating, they wouldn’t be the first DWTS pair to come together romantically after meeting on the show. Two of the pros, Peta and Maks, met while on the show and eventually had a baby and will soon be married. And although it was short-lived, Amber Rose and partner Val briefly dated after pairing up in the dance competition. Some of the romances born from DWTS fizzle quickly, while others turn into much more serious relationships, so Bonner and Sharna eventually getting together isn’t something we should totally rule out until their time on the show this season is over. But for now, Bonner is totally single.