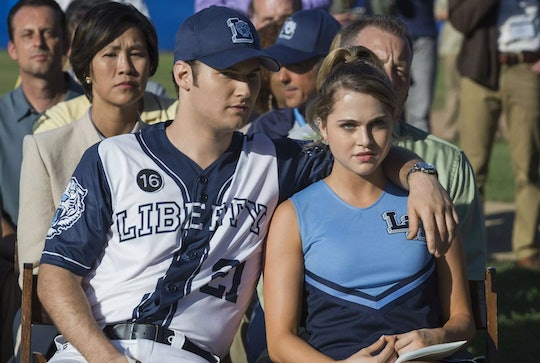 Who Is The Father Of Chloe's Baby On '13 Reasons Why'?

Warning: there are MAJOR spoilers ahead! If you haven't watched the second season of 13 Reasons Why and you don't want to be spoiled, you should probably stop reading right now. But if you have watched and you're curious to know about that wild finale, stick with us. The second season of 13 Reasons Why ended with plenty of huge moments, including a pregnancy that left us all wondering: is Bryce the father of Chloe's baby?

While it seems fairly obvious that Bryce Walker (played by Justin Prentice) would be the father of Chloe's (Anne Winters) baby, the truth is that 13 Reasons Why doesn't confirm or deny this. Chloe's shocking reveal comes in the 13th episode of the second season, after she runs into Jessica (Alisha Boe) in the bathroom during the spring fling dance. Jessica wants nothing to do with Chloe, but Chloe stops her fellow cheerleader to tell her that she's pregnant. Chloe is clearly upset about the news, and when Jessica hears it she, too, becomes emotional. Honestly, how could Chloe have let this happen? Though she's a fickle character, she seems to have a fairly decent head on her shoulders -- the kind that would want to use protection. Unfortunately, that's just not the case.

However, we have to give Chloe a break here because it's unclear when she got pregnant. When we first met Chloe she was just a bubbly cheerleader who was dating Justin and in severe denial over Jessica's rape claims. As the season goes on she begins to slowly but surely realize that maybe, just maybe, her boyfriend isn't as perfect as he claims to be. In one disturbing moment, we find out that Chloe is yet another girl that Bryce raped while in high school. There's proof of Chloe's rape, too, thanks to the box of Polaroid pictures found in the baseball team's "clubhouse" where Bryce and his boys conduct most of their unspeakable acts. In hopes of taking Bryce down, Jessica brings the Polaroid pictures to Chloe and convinces her to testify against him -- only for Chloe to change her mind at the last minute and save Bryce's you-know-what.

Now, this is where things get pretty tricky on 13 Reasons Why. The timeline of events between Chloe and Bryce are very unclear. For example, we don't exactly know how long they've been dating -- and we definitely don't know when he took her to the clubhouse and raped her while his friends watched and took pictures. Was it before they were dating? Did it happen after they began a relationship? Also, did Chloe change her mind on the stand because she already knew she was pregnant? Was she worried that turning on Bryce would affect however she decides to proceed with her pregnancy? These are questions we need answers to, especially now that Chloe has confirmed she's pregnant.

If Bryce turns out to be the father -- which, quite frankly, who else could it be? -- there is a possibility that she became pregnant from the time he had non-consensual sex with her. This is especially true if Chloe was, in fact, as smart as we hoped she was and made sure Bryce was using protection during their relationship.

If 13 Reasons Why comes back for a third season, Chloe's storyline could definitely take center stage as she figures out what to do next. We could watch as Chloe goes back into a denial cocoon so that Bryce and his family will help care for her and her baby, or she could finally decide to tell the world the truth about what happened to her. With 13 Reasons Why you never really, truly know what's going to happen next... so we'll just have to wait not-so-patiently for word on a third season.