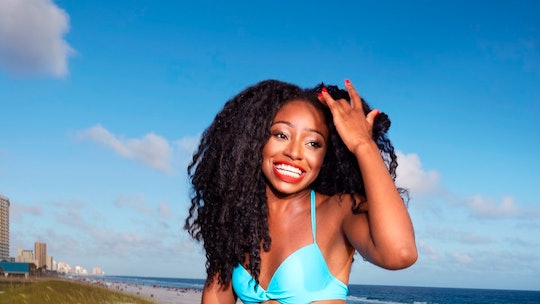 No one has had it easy romantically on Floribama Shore, possibly least of all Candace. She went on an awkward date with her crush Michael during Season 1 which didn't exactly result in fireworks. During Season 2, she introduced the rest of the cast to her boyfriend, Gator Jay, only to have his true colors come out as controlling and manipulative. Now that she’s fresh off a date with fellow housemate Codi, is Candace dating anyone after Floribama Shore? There is a tweet that makes it seem like she’s moved on to bigger and better things since filming for Season 2 wrapped.

When a fan tweeted about the show, saying that Candace should know her worth, she responded, "Dating sh*tty men will do that to ya... I was insecure in the house cause my relationship wasn’t secure... luckily it all gets better" followed by a heart emoji. Maybe she just meant that once you move on from toxic relationships things are better on your own. Or, Candace is dating someone new and for once, it’s working out for her. Either way, she seems to have a healthy outlook on relationships. Dating a couple of duds will usually give you clarity needed to find someone worth your time, or help realize that you’re all you need for a little while.

Back in May 2018, Candace spoke to Life & Style about her relationship status at the time and although it was well before filming ended for Season 2, she seemed happy to be single. "I’m pretty casually single right now," she said at the time. "I’m just kind of casually dating and kind of just seeing what’s out there. You know, times have changed so I’m just like, 'Whatever.' It’s hard out there!" She explained that "if you give out good energy and you attract great guys, then yeah, you can find a great guy anywhere." Hopefully, she has the same outlook now if she is single after Floribama Shore.

If Candace’s tweet meant that she’s moved on, though, she has yet to announce who her new mystery beau is. I think it’s safe to say that Candace and Codi didn't become a thing after he revealed his crush to her more than once and thankfully, Gator Jay seems to still be totally out of the picture. It’s possible that Candace is just keeping a new romance private because we all saw how her last public relationship turned out. Let’s just hope that Candace is happy flying solo or happy in a new relationship outside of the show.

I know I’m not the only one who shipped Codi and Candace hard ever since he revealed his crush on her. To her credit, she gave it the old college try, but if the feelings aren't there on both sides, then I guess they’re better off as friends rather than another dramatic on again/off again couple on the show. After dating Gator Jay, who was out of the picture almost as soon as he began to show who he really was and, as Candace revealed on the show, "put his hands" on her, it’s understandable if she wants to take her time finding someone new.

After the Dec. 13 episode, tons of fans tweeted at Candace to stay strong and positive after her breakup and since she liked or retweeted them, I'd say she’s strong enough to move on when she’s ready. Until then, she can continue to be the voice of reason for the other relationships in the house and keep her hands clean of any other awful romances.