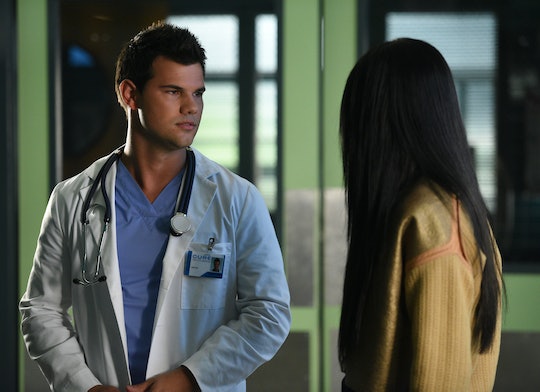 Is Cassidy Cascade A Vampire On 'Scream Queens'? 5 Theories About The Young Doctor

We were promised two hot doctors who look nothing like real doctors, and with Season 2 of Scream Queens, we got that with Dr. Brock Holt and Cassidy Cascade, but not without some weirdness surrounding the two of them. Like the possibility that Cassidy is something more supernatural than just really really good looking. So, is Cassidy Cascade a vampire on Scream Queens? So far, all signs and gratuitous Twilight references point to yes, but that would be almost too easy. Still, the theories surrounding Cassidy Cascade on Scream Queens are all about him possibly being a vampire or other supernatural creature. At the very least, there are obviously big plans for the ice cold doctor.

When Zayday touches Cassidy's back and notes that he feels like a "block of ice." It feels like an obvious reference to Edward Cullen being cold as ice as a vampire on Twilight. But pair that with Cassidy's interest in the dead and his line about silence being the "only appropriate response to the gaping expanse of emptiness that stretches out before each and every one of us," and it's staring us all in the face.

But again, having a big reveal of Cassidy being a vampire on Scream Queens would be much too obvious, given that we already have all of these supposed clues in just one episode. So let's take a look at all of the possibilities, shall we?

They're Obviously Going The Vampire Route

On the one hand, all of these vampire-themed clues surrounding Cassidy could be too much too soon, but on the other hand, maybe the big reveal of him being a vampire isn't going to be a big deal at all in the grand scheme of things this season. And if they decide to go this route, instead of making him an actual, supernatural vampire, they would likely go the route of making him someone who has a strange medical condition that requires his body to remain cold.

The show hasn't really had any supernatural elements to it so far, so there's no reason to believe that Season 2 of Scream Queens will, but who's to say that there won't be a medical reason that Cassidy is basically a vampire?

He's Actually The Son Of The Couple From The Season Premiere

Think back to the couple at the beginning of the episode, who in 1985 were being denied the proper kind of medical help while at the hospital that is now under the care of Cathy Munsch. The woman was pregnant with a boy, and unbeknownst to her, her husband was about to be thrown into the swamp and left for dead. Given the appearance of both the woman and her husband and the age the baby would be now, it makes total sense that Cassidy is that baby today.

He also says that the reason he went into medicine was because of the way he'd seen his family treated by the healthcare system over the years, which again, would coincide almost too well with the couple from the beginning of the season premiere.

He Knows Who The Killer Is

Cassidy is a weird guy. Possible supernatural elements aside, he's just different. Not quite charismatic like Brock and he only decides to go on a date with one of the doctors in training when Chanel #3 talks about her love of death. So it wouldn't be totally crazy to consider that Cassidy is hiding a lot of secrets. Taylor Lautner recently revealed in a YouTube video that a couple of secrets will eventually be revealed about the doctor who is "basically female Viagra."

One of these could easily be that he not only knows who the killer is, but that he has a strong connection to them somehow.

If he isn't a vampire, then consider this — Cassidy is like Frankenstein, only without the neck bolts and with none of the weird zombie swagger. Maybe he died some time ago and someone else in the medical field (maybe even at Munsch's C.U.R.E. hospital) reanimated him and now he's cold physically, and emotionally, he's indifferent.

Almost every time he talks, he seems to do so in a way that is flat, precise, and without much smiling or excitement. Which is perfect for a guy who came back from the dead and isn't all there anymore. Remember how weird Kyle (Evan Peters) was when he came back to life on American Horror Story: Coven?

He's Working With The Killer

If Cassidy doesn't just know who the killer is, then he's working with him or her. Last season, we had two killers on Scream Queens and it worked out well, enabling characters to be in places where the Red Devil was in order to throw us off. While having two killers this time around would be repetitive, it would also be the same thing the Scream movies have done and it worked out well for that franchise.

If Cassidy is working with the killer on Season 2 of Scream Queens, it also plays into the idea that his father is the patient who was dumped into the swamp at the beginning of the first episode. He might be ready to get revenge on the hospital officials, regardless of whether or not they played any part in his father's murder.

But is Cassidy Cascade a vampire on Scream Queens? Going the supernatural route wouldn't be new to Ryan Murphy, but it would be new to the Scream Queens universe. Either way, though, there is obviously something "off" about the guy, no matter how good looking he might be.