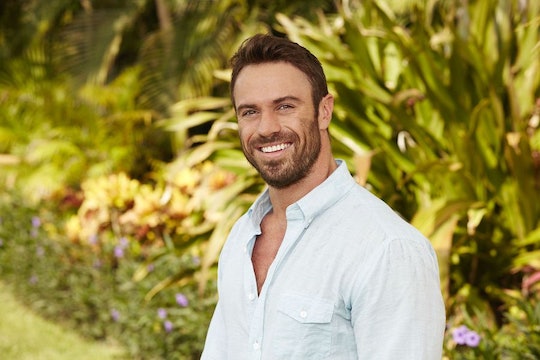 Chad Johnson Was Spotted On 'DWTS'

If you thought you'd seen the last of Chad Johnson from Season 12 of The Bachelorette, you're very much mistaken because even before Bachelor in Paradise returns with (hopefully) another season featuring the meat-loving contestant, he's been spotted on (or at least near) the ballroom on ABC. Fans seem to have spotted him in quick spurts on Monday's episode of Dancing With the Stars, so is Chad Johnson in the audience on Dancing With the Stars?

The Bachelorette alum, known for being the reality "villain" with plenty of Chad-isms, was spotted in the audience by plenty of confused fans. Being the open and totally unapologetic guy that he is, you'd expect Chad to be all about tweeting his attendance at DWTS Monday night, but even though he didn't, he definitely didn't want to be lowkey about it. He was in the front row at all times, clapping when appropriate and likely enjoying each of the amazing numbers by Season 24's duos.

Apparently, up next for Chad is appearing on Famously Single with DWTS pro Karina Smirnoff, so he definitely has ties to the show right now, in a roundabout way. He's definitely not there to cheer on Nick Viall, who is most famous for being the most recent Bachelor, but who Chad has never been a huge fan of. So why is Chad in the audience at DWTS?

Whatever his reason for being there (maybe he's a big supporter of the arts, via dancing?), Chad is still on social media as he sits in the audience. He even used a commercial break to retweet a fan who was asking if that was really him in the audience. I'm also inclined to believe that any Bachelor Nation darling is privy to DWTS tickets at any given time, should they request them. Chad is no Rachel Lindsay or JoJo Fletcher, but he's kind of a big name as far as Bachelorette fans are concerned. And fans still haven't forgotten him.

Apparently, though, even Chad can get into the dance numbers while sitting in the audience at DWTS. Personally, I'm just glad he's not claiming to be a better dancer than anyone like, ahem, Nick, because let's just not go there.

To his credit, at least Chad took the opportunity to cheer for each pair out on the dance floor and at least looked like he was having fun instead of being a poor sport. His next move may be on Famously Single, but I can only hope that he'll also be a part of Season 4 of Bachelor in Paradise. Seeing Chad in the audience on DWTS has only reignited interest in the former Bachelorette villain.