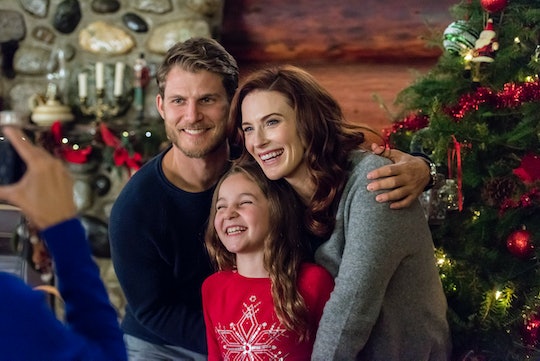 'Christmas Getaway' Will Make A Hopeless Romantic Out Of You

This season, there are a handful of brand new Hallmark holiday movies for your binge-watching pleasure. With so many family movies, I seriously don't know how the writers over there don't run out of good plot lines every year, which got me thinking. Are movies like Hallmark's Christmas Getaway based on a true story? After some sleuthing, I quickly realized that I might have had too much eggnog: This particular movie is not based on a true story at all, though it would be a whole lot nicer if it was, right?

What if every time your life seemed to be going completely off the rails around the holidays, you found yourself trapped in a winter wonderland with an attractive love interest with a cute kid, learned something about yourself without having to pay for years of therapy, and you lived happily ever? Sigh.

That's actually what Travis Van Winkle, who plays Scott Hays in the movie, loves about doing these kinds of projects. He said in a cast interview on Hallmark.com:

They're feel good movies, so they tend to represent sort of an idealized version of life. Where it's the happy ending, the characters usually have this big breakthrough, and they get to be together in the end. They always leave you feeling like, 'life is good.'

The movie isn't too out there, either. The story centers around Emory, played by Bridget Regan, who breaks up with her boyfriend right before the holidays. To get away from it all, she decides to spend Christmas alone in a cabin in the woods to think about her life, and her editor convinces her to write a story while she's up there. (Is it just me or is every single protagonist in these movies working for a magazine or publishing company? What gives?)

Meanwhile, Scott, a widow, is headed up to the same place with his adorable daughter Katy, after she overhears a few moms at her school talking about it. He recruits his mom, played by Teryl Rothery, to come up and spend the holidays with them. When they get there, both Emory and Scott's family are given the keys to the same cabin by mistake. And since it's Christmas, there's just no more room at the proverbial inn and they all have to bunk together.

For some reason, Emory isn't totally mad at the situation, if only because she thinks she can use Scott and Katy as the subject of her story. Of course, all of this happens while they fall in love with each other, and by the time Scott's mom shows up for the holiday, it's a match made in romantic comedy heaven. It's adorable, and although it's new this year on the Hallmark channel, it will likely become another Christmas classic.

According to Regan in a cast interview, that's part of what drew her to the film. She said, "This script in particular felt, well, one time it felt really fresh and new, [yet] there's something really classic about it as well. It's a really heartwarming, timeless, Christmas story."

Van Winkle added that it was all due to the team that went into making the movie. He stated in the same interview: "The energy on this set is fun and silly and engaging and kind, and there's a lot of eating and drinking of coffee. it's very warm and its been a really creative and collaborative set."

All of those good vibes, snacks, and coffee breaks must have done the trick, because a Christmas Getaway will undoubtedly turn out to be one of those holiday feel good flicks that's too good not to be true.