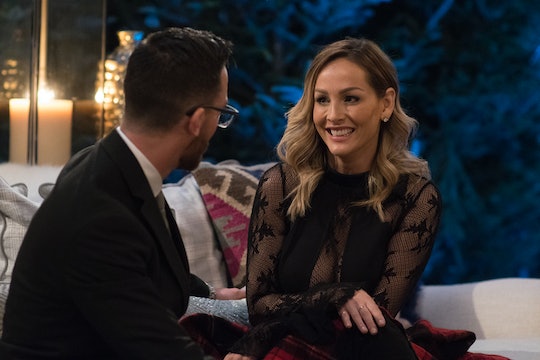 Who would have thought that in just four episodes, we’d see actual love blossom between some of these contestants? For Clare Crawley in particular, though, things may have worked out even better than she ever expected. The official Twitter account of The Bachelor Winter Games confirmed that someone walks away from the season with a ring on their finger and many are confident that the person is Clare. So is Clare engaged after The Bachelor Winter Games? This clue could mean a proposal is in her very near future.

As if anyone needed any more reason to be excited for the rest of the inaugural season of The Bachelor Winter Games, the show tweeted out a close-up photo of a woman’s hand with an engagement ring and teased that the season will, in fact, end with a proposal. "Breaking News: There will be ICE on #TheBachelorWinterGames!!," the caption stated. "Who will be engaged? Watch it all play out next week!"

And while it's hard to look away from that gorgeous Neil Diamond ring, the biggest clue that points to the soon-to-be married woman being Clare is actually the other ring on her finger. The small gold band shown in the photo is so similar to the same ring Clare has been seen wearing both on and off the show that you almost have to insist that it’s Clare who gets engaged by the end of the season.

But once again, before we all assume that this means Christian Rauch proposed to Clare, did we all already forget about Benoit Beauséjour-Savard? Granted, the jilted contestant went home on his own accord when Clare made it clear that her feelings for Christian were stronger than those she had for him. But you have to expect him to show up at the Women Tell All special after the finale airs.

Typically, these kinds of shows give contestants a chance to confront each other in front of a live audience of their peers, so it’s all very terrifying and intimidating I’m sure, but there’s always the off chance that Benoit shows up and sweeps Clare off her feet once again and that, after filming ended, things didn’t pan out quite the way she’d hoped they would with Christian. I mean if not, Benoit for Bachelor 2019, right? Or maybe he even returns to the mansion in Vermont sometime this week in the hopes of winning her back.

Then again, if Clare and Christian are one of the few couples at the end of The Bachelor Winter Games, then it could be Christian who proposes to her after all. There's definitely an attraction between them, though they've had a fair share of ups and downs thus far. But if he takes relationships as seriously as Jacuzzi appointments, then Christian could have proposed to Clare at the end of filming the show.

But aside from who could have proposed to Clare, it feels almost given that she is the one who gets engaged after The Bachelor Winter Games. Sure, Dean Unglert and Lesley Murphy are still adorably smitten with each other outside of the show and aren’t shy about their real life relationship now, but the proof is in that tiny gold ring. I mean, it’s literally staring us all right in the face in that engagement ring photo and looks nearly identical to one of Clare’s rings, so I refuse to deny this very real possibility.

The important thing is that not only did the newest show in The Bachelor franchise work for a number of people, but that it also resulted in an engagement. If it is indeed Clare, it would probably be the best possible outcome for someone who didn’t have the best time on Juan Pablo Galavis’ season of The Bachelor years ago. In which case, I could not be more happy for her.