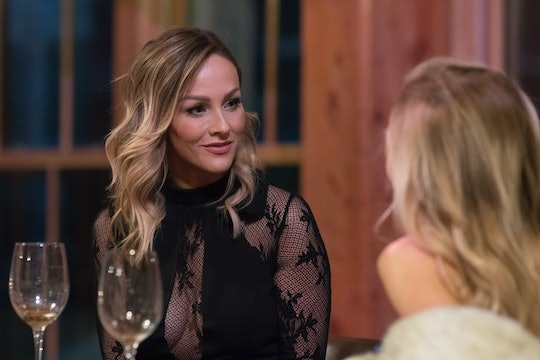 Despite The Bachelor Winter Games being the shortest Bachelor spin-off ever with just four two-hour episodes, apparently filming took long enough for some of the new couples to actually fall in love. If Carly Waddell and Evan Bass can find the real thing on Bachelor in Paradise, though, then who am I to judge? And since Clare Crawley and Christian Rauch are one of those couples, I can't help but wonder: are Christian and Clare still together after The Bachelor Winter Games? The season will apparently end with an engagement, much like most seasons of Bachelor in Paradise, and I am fully prepared to witness a romantic ski lift ride off into the sunset afterward, but there are a few red flags about Christian and Clare making it work outside of the show.

For one, they got off to a very rocky start. Although Clare seemed to be interested in Benoit Beauséjour-Savard at first, it wasn't long before Christian also caught her eye and she realized that she had stronger feelings for him instead. This led to Benoit leaving and it left Clare open to follow her heart, but things still didn't get any less messy for the couple. They got into a heated argument over Clare missing their Jacuzzi date, which involved a lot of "It's OK" responses from Christian, which only made matters worse.

For those who don't know, Clare was a contestant on Juan Pablo Galavis' season of The Bachelor and he was known for those nonchalant responses when things were, in fact, not OK. So yeah, it was a pretty big fight during what was supposed to be the start of Clare and Christian's relationship.

At the end of The Bachelor Winter Games episode, Clare still accepted Christian’s rose at the rose ceremony and they seemed to be ready to start things fresh, but with just two episodes left, it’s hard to say for certain if they’re still together after the show is over. Recently, however, it was revealed on Twitter that a couple does get engaged on the finale and despite Clare and Christian’s relationship being relatively new, it could be them. Granted, there are some other couples who have grown closer, like Ashley Iaconetti and Kevin Wendt or Bibiana Julian and Jordan Mauger, but there’s one telling clue that might make you think Christian and Clare get engaged on The Bachelor Winter Games.

In an image tweeted out by the show, you can see a man and women holding hands with a big old diamond engagement ring on display. But what you also see is a small, simple gold band on the woman’s pinky ring and Clare has been seen with a very similiar looking ring over and over. There are even Instagram photos that show her wearing the ring on various fingers.

Even though the contestants live across the world from each other, with Christian residing in Germany and Clare helping to run a salon in Sacramento, California, it does initially put a damper on the prospect of the couple still being together or even engaged, because that’s a pretty big move for either of them to make. But judging by Christian’s Instagram, he’s spent a lot of time in Los Angeles lately, which is basically a stone’s throw away from Sacramento compared to how far it is from Germany. So could they be laying low as a couple after The Bachelor Winter Games?

Since neither of their social media pages have any other clues that would suggest they’re still together, that does make some alarm bells go off. Then again, you really can’t ignore the telling gold band that the mysterious engaged contestant is wearing, as it matches Clare’s own ring exactly.

Even though they didn’t get off to the best start, the interest was there from the beginning on both sides and since Clare followed her heart in pursuing Christian over Benoit, we can only hope that the commitment of an engagement came from it all.