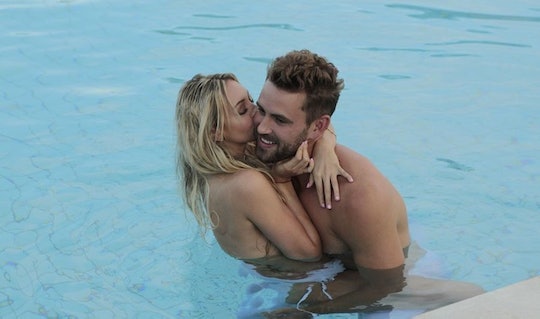 During Season 21 of The Bachelor, Corinne was nothing if not totally devoted to the cause. In this case, the cause would be Nick Viall and the weekly roses that were tokens of his affection and indicators that she would be staying on. But Nick surprised a lot of viewers when he sent her packing right before fantasy suite dates and the whole thing was surprisingly heartbreaking. Now that it’s all over though, is Corinne dating anyone after The Bachelor?

She clearly has a lot of love to give and was more than generous when she took Nick on a $3,000 shopping spree, not even batting an eye when she swiped her credit card and treated her man to some new expensive threads. But even designer sweatpants weren’t enough to keep the Bachelor’s affections and during Corinne’s exit limo ride she made it clear that she needs to find someone who can appreciate all she has to offer.

So is Corinne dating anyone now? Since filming of The Bachelor ended for Corinne, she seems to have totally immersed herself in her modeling career and continues to work with her family, but that doesn’t mean there hasn’t been time for flirting. This is Corinne we’re talking about — there’s always time for flirting.

Almost as soon as people were throwing around the term “villain” in relation to Corinne, there were also fans rooting her and Chad from Season 12 of The Bachelorette to get together for a drink or two. In case you’re new to the Bachelor franchise, Chad was the resident bad boy last season on The Bachelorette, so in some viewers’ eyes, they figured it'd be the perfect match.

But even though they’ve done a bit of texting and have met in a person a couple of times, Corinne says that nothing is going on with the former Bachelorette contestant and told Terri Seymour as much on Extra. “I actually just shared a quick few words with him at a party,” Corinne told Seymour. “Very nice guy, it was nice to meet him in person, very sweet man, but really, that’s it.” She was referring to a pre-Oscars party where the two former "villains" took a photo with Bachelor Season 20 contestant Olivia Caridi, but there was definitely a lot of texting going on before they met in person, however innocent it all was.

Chad told Entertainment Tonight’s that he is interested in Corinne and first interacted with her through texting to help her get through things once Season 21 of The Bachelor premiered. “A couple weeks down the line, I think she texted me like, ‘This is getting kind of tough’,” Chad said. “But yeah, she seems pretty cool. She obviously doesn’t care at all what anybody thinks.” I’m not going to assume that a lot of flirting went down via texting, but let’s just agree on what beautiful babies Chad and Corinne would make.

One of Corinne’s exes by the name of Keith Berman spoke to Us Weekly about his former relationship with the Bachelor contestant and had only positive things to say about her, insisting that although her personality portrayed on The Bachelor was an “exaggerated representation,” she’s just a confident and smart woman.

And if Corinne is single now, she totally deserves to find love. So if that means going on Bachelor in Paradise Season 4 to totally steal the show and be amazing, then so be it.