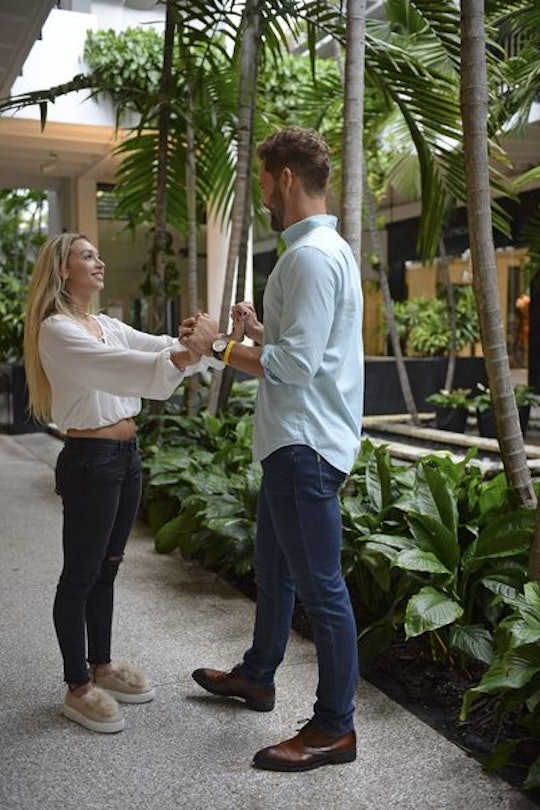 Nick Made A Hard Decision On 'The Bachelor'

Everything was lined up perfectly for Corinne. She took Nick on a $3,000 shopping spree for sweatpants, he ate some authentic Greek olives like a champ, and then he even got her father's permission for a proposal. So why did Nick eliminate Corinne on The Bachelor then? Apparently receiving her father's blessing and getting treated to a clothes makeover wasn't enough to sway Nick on the idea of keeping Corinne on The Bachelor long enough for the final two, or even the impending fantasy suite dates. Some fans have been predicting this moment since Day 1, ever since she was given the not-so-coveted title of "villain" early on. But Nick was obviously serious about Corinne on The Bachelor to keep her around for so long. Just not serious enough.

So where did things go wrong? Honestly, every time Corinne and Nick's budding relationship could have been ruined, it wasn't. Like when she so wasn't into the "planned dancing" of the Backstreet Boys concert date, or when she decided she would rather nap instead of do farm work (I mean, wasn't that most of us though?).

There was also the big Taylor/Corinne fight, which resulted in Taylor going home. So maybe the problem wasn't Corinne in the end, but partly the fact that Nick's connection and future with the other three women seemed much more certain to him.

By all accounts, Nick and Corinne seemed fairly solid even after meeting her family, which could have gone horribly. Really, the most awkward parental interaction was Nick with Vanessa's dad, but can we please not even go there because I still can't think about it without getting embarrassed.

Meeting Corinne's dad on The Bachelor was as good as it could have been and resulted in the two sharing a glass of scotch. Papa Olympios told Nick, "If you can say to yourself, 'I can be happy with Corinne for the rest of my life, and this is the girl I want to offer a ring to, and I know Corinne would be equally as happy,' that's good enough for me." And that's good enough for me too, if anyone was wondering.

But as close as Nick and Corinne have gotten over the several weeks they filmed The Bachelor, there has been something with Rachel from night one and soon after, his connection with Vanessa started to grow. I'm not sure when the Raven adoration started, but apparently Nick was smitten by the time hometown dates rolled around. But what all of these women don't have in common with Corinne is the amount of one-on-one dates they got. As in, Corinne had zero. And this could have very well played a huge role in Nick eliminating Corinne in the end.

In some of the episodes leading up to the hometown dates, Corinne voiced her concerns on more than one occasion about never getting any one-on-one dates and what that meant for her future with Nick. Obviously Nick was still super into her, but because they didn't get enough time to really cultivate their relationship on their own, it wasn't strong enough in the end.

All we can really do now is hope and pray to the Bachelor gods that we will see Corinne again on Bachelor In Paradise. It just wouldn't be the same without her.