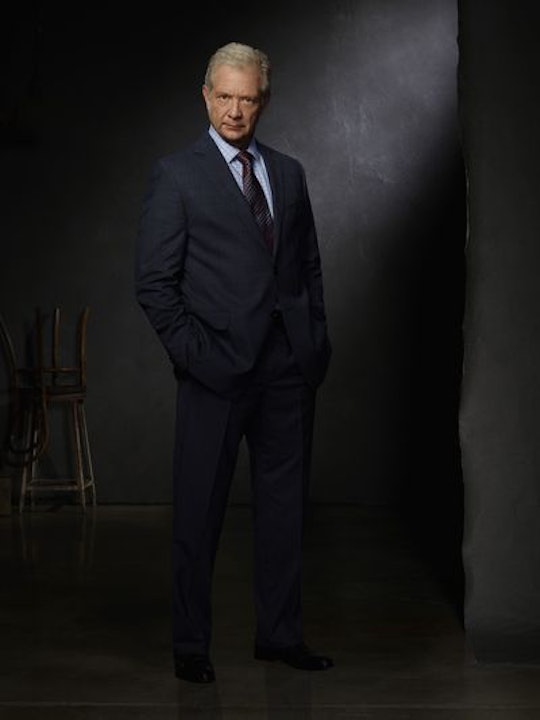 Cyrus May Not Be Guilty After All On 'Scandal'

Some might say that Cyrus hasn't had enough screen time so far this season on Scandal to be considered truly guilty of killing Vargas, but the evidence is starting to pile up while he still claims his innocence, so is Cyrus being set up on Scandal? It's entirely possible, given that showing his guilt now would be almost anticlimactic. And since Scandal has started showing flashbacks from the end of the campaign, there's a chance that more scenes between Cyrus and Vargas will be revealed, giving viewers more clues on whether or not Cyrus was set up for the murder.

They got a man in custody who had ties to racism and anti-Vargas social media posts, but since he didn't confess to anything until Jake literally scared the piss out of him, he's an obvious red herring. But if this guy didn't do it, then did Cyrus? The surveillance tape of Vargas threatening to throw him in jail and the fact that his death gave Cyrus so much to gain certainly implicates him, but at this point, it's all very circumstantial. He's a good actor, but the innocence he's been asserting since day one hasn't faltered at all, so is Cyrus being set up on Scandal or is he just playing the part really well right now?

Cyrus has never been shy about bending the rules, breaking the law, and basically doing whatever he wants to get stuff done. The Cyrus we see now is almost humbled by what happened to his running mate and, if he's faking it, he's definitely going for the long con. He even had the chance to break out that Cyrus Beene growl when he and Mellie were alone, but he still asserted his innocence.

Someone else could very well have been responsible for Vargas' death, knowing full well that Cyrus would get the heat for it. They could have even been behind the tip that was called into the FBI, citing Cyrus as the culprit. The only one devious enough to pull off something like that is pretty much anyone in B613, which does include Olivia's dad, who still has Jake wrapped around his powerful finger. And if along the way, Cyrus is collateral damage, something tells me that literally no one who is responsible for framing him would mind.

In the promo for Season 6, Episode 3, Cyrus says that he thinks he's being set up by Olivia and by all accounts, her desire to get her candidate into the White House is very strong, but to arrange the death of an innocent man in the name of getting Mellie the presidency because of an innocent man's death is more like her father's style. I hate to say it, but the more Cyrus sticks to his innocence, the more I see Vargas' death being part of some much bigger plot that doesn't involve him at all.