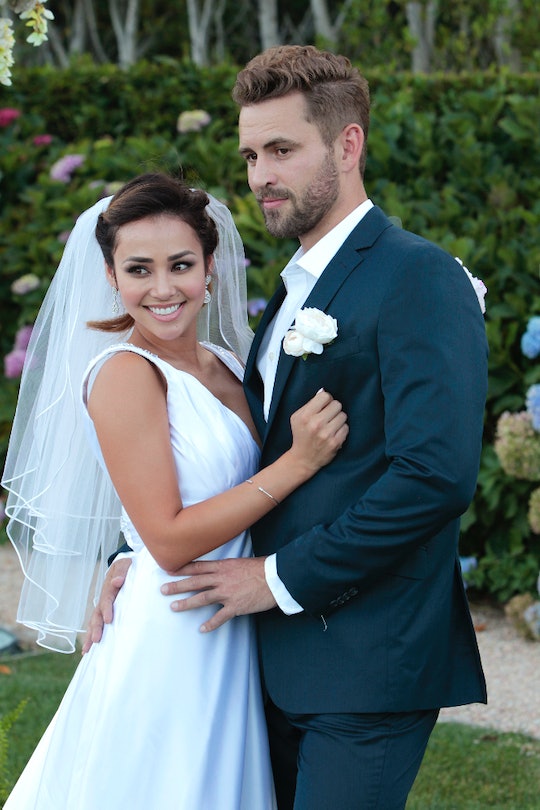 Danielle L. Is Keeping Her Love Life On The DL

Danielle Lombard might not be one of the bigger "personalities" on this season of The Bachelor, but she's definitely made an impression on Nick Viall. Despite the fact that Season 21 is rapidly turning into "The Corinne Show," Danielle has gotten more quality time with the three-time Bach Nation alum than many of the other remaining women. Their quick and close connection has led many viewers to wonder whether Danielle L. is single after The Bachelor — or if there are any hints that she did win the 36-year-old Bachelor's heart after all.

The show has just passed Week 5 and ordinarily, I'd feel safe calling Danielle L. a definite frontrunner. But this is Nick we're talking about — unpredictability goes hand in hand with him. Already this season we've seen him send three different women home in the midst of dates: Liz Sandoz during the Museum of Broken Relationships group date, Dominique Alexis during the "Nickathlon" group date, and, most recently, Taylor "Emotional Intelligence" Nolan during the most tense two-on-one date ever.

Danielle L. definitely seems like a frontrunner right now. She and Nick had great chemistry while they were dancing on stage with the Backstreet Boys, when Danielle was named the winner and won that group date rose (awkward middle school slow-dancing aside). Just a week after that, Nick chose the 27-year-old small business owner for the first of his two hometown one-on-one dates in Milwaukee, Wisconsin. Plus, she survived the manufactured awkwardness of "bumping into" Nick's ex in town. So that's gotta say something about the strength of their burgeoning bond.

Licking cake off of one another = definite chemistry.

Like most of the contestants, Danielle has been posting on social media with some frequency since filming ended, but it's hard to tell whether she's single or not. As with every Bachelor contestant, they're required (by contract) not to divulge their romantic status on social media — until after their elimination episode airs or, if they're the winner, until the final rose ceremony concludes. However, there is clearly one special man in Danielle's life: her dad!

Danielle posted a cute photo of herself with her father on Instagram, explaining in the caption that her father had been her date to a recent family wedding. So if Danielle is dating someone — whether that's Nick or a different guy — she's keeping it well under wraps.

It's also worth noting that Danielle apparently loves to travel. Before she left to film The Bachelor, she was taking a trip through Iceland and, even earlier, a jaunt to Honolulu. After filming wrapped, she was back online and posting pictures of an amazing vacation in Thailand. Now, that doesn't necessarily mean that she's unattached after The Bachelor. But if she is with someone, they either don't mind her going on vacations without them *or* they were very sneaky about staying out of her trip pics.

When she's not traveling, with family, or doing some part-time modeling, Danielle's also been hanging out with her fellowBachelor alum, apparently! In mid-January, she visited Disneyland with Sarah Vendal, Jasmine Goode, and The Bachelor producer Natalie Shabtai.

Clearly, single or not, Danielle is spending her post-Bachelor life in the best possible way! And really, in the end, that's all that matters.