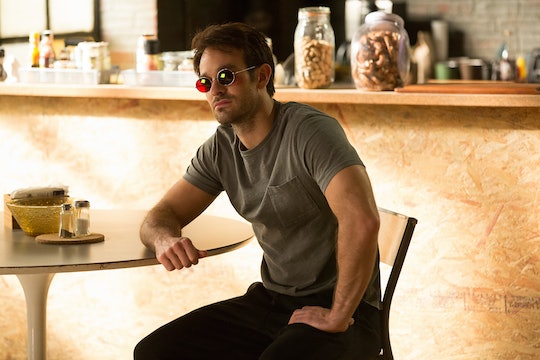 Daredevil Could Pop Up On 'Iron Fist'

When you exist in the same superhero universe as another spandex-clad crusader, it's only inevitable for your paths to cross. Just look at the Marvel heroes in The Avengers or The Justice League with all of DC’s best heroes. With Netflix’s own surge of superhero shows, which has just added Iron Fist to the ranks, fans might be asking: is Daredevil's Matt Murdock in Iron Fist?

Daredevil could show up at any time since the shows take place in the same universe. Not to mention the fact that later this year Netflix will premiere The Defenders, which will feature all of the vigilante's coming together. So it’s a real possibility. Much like Marvel’s other group of bad-guy-fighting, world-saving heroes, The Defenders will wrangle up similar superheroes in the form of Jessica Jones, Luke Cage, Iron Fist, and Daredevil himself. And since all of the Netflix heroes are going to star in it, fans would be justified to assume that Matt Murdock might appear in Iron Fist to kick that story off.

At the 2016 New York Comic Con, all of The Defenders made their first appearance together on-stage, giving fans a taste of what it will be like when the heroes reconvene in the Netflix series of the same name. Since both Daredevil and Iron Fist take place not only in the same universe but the same city (New York), and both deal with the same bad guys at some point (The Hand), it would be smart to have Daredevil himself make at least a cameo in the latest series.

The story of Iron Fist goes that Danny Rand, the kid behind the fist, is the sworn enemy of The Hand, a group of villainous fighters who have also been seen in Daredevil. This alone is more than enough to have Matt Murdock in Iron Fist.

While it hasn't been confirmed that Daredevil will be on Iron Fist, Rosario Dawson will once again play Claire Temple, nurse to all the superheroes and the recent love interest for Luke Cage. She’s appeared in pretty much all of Netflix’s superhero series including, Luke Cage, Jessica Jones, Daredevil, and now Iron Fist and The Defenders. With a common thread like Claire making a steady appearance in yet another Netflix Original Marvel series, there’s no telling who else might pop up along the way.

If Matt Murdock is in Iron Fist, it’s being kept seriously under wraps, but if nothing else, the heroes will fight together in The Defenders later this year. Iron Fist will be available for streaming on Netflix Friday March 17.