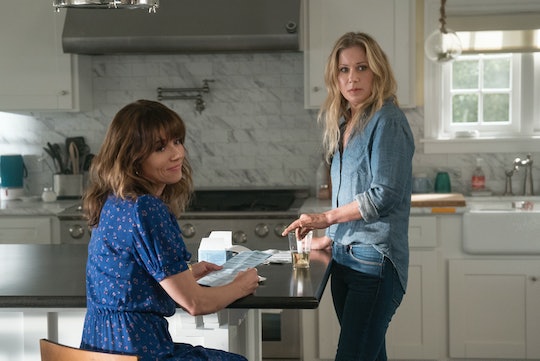 Grace & Frankie is one of the longest running Netflix Originals and there doesn't seem to be an end in sight. Still, Netflix is churning out new content regularly, including the new dark comedy Dead to Me. The series follows two widows who meet in a support group and become friends. Their unusual friendship definitely makes them seem like a younger version of troublemakers Frankie and Grace, so is Dead to Me the new Grace & Frankie?

Right off the bat, there are some big similarities between the two series. They both feature two strong female leads who happen to be best friends, though not at first. In Grace & Frankie, they were actually rivals until their husbands left them for each other, which forced a bond between Frankie and Grace. In Dead to Me, Jen and Judy are strangers until they meet in a grief support group and start to lean on each other for support. Of course viewers later find out that Judy has ulterior motives behind befriending Jen, but in the beginning, their friendship seems akin to Grace and Frankie’s.

As a whole, however, I think it's safe to say that Dead to Me is just different enough and dark enough to consider the show its own entity rather than a replacement for Grace & Frankie when it finally gets its final season on Netflix. But maybe it's just a darker version.

At first, Dead to Me does feel reminiscent of Grace & Frankie in that it too is a show about female empowerment and two new BFFs bonding over similar losses. Jen and Judy even get into hijinks of their own before the dark part of the dark comedy comes into play. So I can totally see why some fans might be comparing the two Netflix series. But the main similarities end there, especially since Dead to Me Season 1 ended with a doozy of a finale.

"This show will always be a show that explores the dark sides and the light sides of grief, loss, forgiveness and friendship," Dead to Me creator and showrunner Liz Feldman told The Hollywood Reporter. "So suffice to say, there will be more darkness." She added that after it was revealed that Judy was (not so shockingly) the woman who hit Jen’s husband with her car, Season 2 will take on a bit of a role reversal. "There’s an evening of the score and there’s a re-balancing that will take place," Feldman said.

Right now, it doesn't seem like Dead to Me is really at the same light-hearted place as Grace & Frankie, but if Season 2 will continue to explore Jen and Judy’s friendship, there’s a chance they could become closer. Jen just shot Judy’s ex and they now have more than one secret to keep between them going into Season 2. They are basically bonded for life. Maybe there’s a chance that now that everything is out in the open, the women can start fresh.

It’s hard to really compare the shows when Grace & Frankie is more light and easy watch than a mystery with comedic elements tossed in at different points. But the overarching themes of two strong female leads who bond over loss definitely link Dead to Me and Grace & Frankie. I wouldn't say that Dead to Me is the new Grace & Frankie, though, if only because no one can really outdo Jane Fonda and Lily Tomlin. It’s still a welcome addition to Netflix and I can see fans of one show liking the other, but Dead to Me might be a little too dark to really be the next Grace & Frankie.