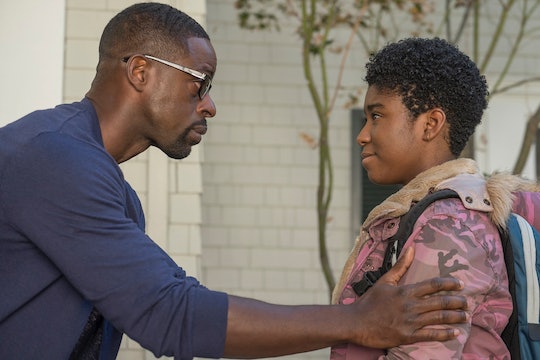 Is This Character Really Leaving 'This Is Us'?

I knew the fall finale of This Is Us would be emotional, however, I didn't expect that we'd be saying goodbye to a much beloved character. (And no, for once I'm not talking about Jack.) Deja’s mom was awarded custody of her daughter again by the end of the hour, which forced Beth and Randall to say goodbye to someone they've truly come to care about. But is Deja leaving This Is Us for good? Her departure certainly had a ring of finality to it and it seems like Deja's mother is in a much better place to take care of her daughter from here on out.

As the social worker told Beth and Randall, she witnessed a clean apartment, stocked refrigerator, and Shauna working to get her old job back as well, which are all clear indicators of a parent trying their best to stay on the straight and narrow for their child. So if things stay this way for Deja’s home life, this will likely be the last viewers have seen of her, at least for a while.

Since Deja’s story arc ended on a positive note, besides all of the tears and Randall’s quivering lower lip, the writers could easily bring her back into the fold in the future, if the story calls for it. That being said, this is still more than likely the end of that particular storyline for now and Deja won’t be returning to This Is Us anytime soon.

The last time we checked in with Randall and Beth, they were determined to fight to keep Deja with them, thinking that her mother wasn't fully ready to properly take care of her. But then Randall remembered a conversation he'd had with William back in Season 1, which viewers never got to see. It was shortly after it was revealed that Rebecca had purposefully kept Randall away from William his entire life.

Obviously, this strikes a very familiar cord with Adult Randall, who was now faced with the idea of putting Deja in a similiar position. Could he really keep her away from her birth mother when he himself felt robbed of his time with William (his own birth father)? No, he could not. In the end, Beth and Randall did what was truly best for Deja and dropped their fight against her returning home to her mother.

Back in October, This Is Us executive producers Isaac Aptaker and Elizabeth Berger spoke to Entertainment Weekly about how having a foster child would impact Beth and Randall and even then, it was more about the journey rather than who the foster child is at any given time.

"I think Randall actually sums it up very well when he says, ‘Nothing in my life has been as hard as people say it’s going to be, and I think this might be the thing that’s actually that hard.’ This is the sort of thing that could test even the strongest of couples, and that is what Beth and Randall are," Berger said. "But they’re going to treat it the way they treat everything that arises, which is with a lot of love and care for each other."

Of course Beth and Randall can give Deja a new home and a solid and steady home life, but her mom cares about her deeply and is trying to be better for her, and not a lot of parents can say the same thing once their children are taken away. It’s easy to give up and to give into poverty, addiction or failure, but Deja’s mom is already taking the right steps to be the solid and steady parent Deja needs and already loves.

Near the end of the This Is Us fall finale, there was a brief scene of a little boy, presumably talking to his social worker, about finding a home. While Beth said that she may not be ready to take in another foster child just yet, this may be what’s next for them. Or, it could have been a scene to represent the fact that there’s no shortage of foster children for them to bring into their home and positively influence, as they did for Deja.

For now, I think Deja's story is concluded, but she left on a note that shows if the writers want her back at some point, it wouldn’t be difficult to make that happen.