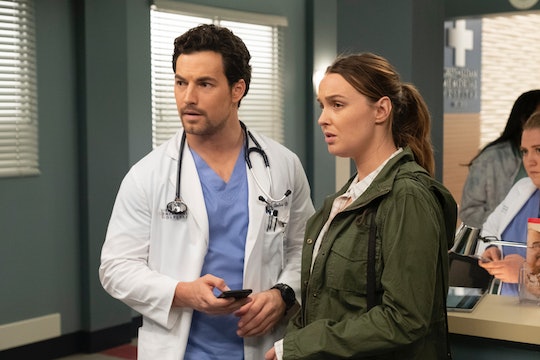 DeLuca's Career Is In Serious Danger On 'Grey's Anatomy'

If there were any doubts about what Meredith and DeLuca have is real, I think he put a stop to that on Grey’s Anatomy last week. DeLuca got the chance to stand up for Meredith in a major way and while he probably shouldn’t have done it for the sake of his career, he took the fall for her insurance fraud. And now you have to wonder if DeLuca is leaving Grey's Anatomy because of it.

Until now, some fans still considered Meredith and DeLuca’s romance rushed or ill-fitting for the two of them. But he possibly threw away his entire career for her in the blink of an eye in order to protect her and for that, fans are swooning over DeLuca and Meredith.

A couple of weeks ago on Grey’s Anatomy, Meredith lied on an insurance form and wrote down her daughter’s name in place of a young Mexican girl who didn't have insurance but desperately needed a procedure. Meredith did what she thought was right and afterward, DeLuca said that he admired her for it. Apparently, he admired her so much that when Catherine questioned him about the incident in last week’s episode, he took the fall instead of throwing Meredith under the bus. Now, he faces possible felony charges for protecting Meredith. It could cost him his career and everything he has worked for. If he goes to prison, I don't see a place for him on Grey's Anatomy anymore.

To be honest, I don't see Meredith just accepting DeLuca's honorable but ultimately stupid decision. If she wasn't in the compression chamber when he told her that he was turning himself in to the police, I'm sure that she would have rushed out to tell the truth. Meredith has worked hard for what she has, so to see her lose it all would be a huge blow for fans. I just don't see things going that way for her since she is such a renowned surgeon. DeLuca has way more to lose and if Meredith sees that, then she will more than likely step up to rightfully take the blame.

Right now, DeLuca faces serious jail time for the crime he confessed to. Regardless of what he claims were his motives, the crime was still fraud and, in the eyes of the law, inexcusable. If he maintains the blame for what Meredith did, then I don't see how DeLuca could get out of going to prison.

From a more logistical standpoint, however, I don't see DeLuca leaving Grey's Anatomy next season. He just professed his love for Meredith and she clearly has some strong feelings for him too. Great loves don't just fall into Meredith's lap and if DeLuca is her new Derek, I don't think the show's writers would split them apart so soon after they became official.

DeLuca made the ultimate sacrifice when he took the blame for what Meredith did. It’s unclear how much this will affect his personal life and his career, but if he goes down for it, then he won't be practicing medicine for a long time. I honestly don't know if his love for Meredith is worth throwing his entire career away. This could change his life in a way that is irreversible and I don't know if he is prepared for that. It could also mean that their relationship is over before she has even said "I love you" back.

Some Grey’s Anatomy fans, however, think that this was as much evidence of DeLuca’s love than any naysaying fans will ever need. I mean, they aren't totally wrong.

DeLuca is Meredith’s first real boyfriend since Derek died, so there was a lot of importance placed on their relationship from the start. She took her time bringing him into her private life and once she finally did, it seemed like things were going well for them. If DeLuca is severely punished for Meredith’s crime that he took the fall for, though, I don't know where that leaves their relationship, or DeLuca, at the end of this.