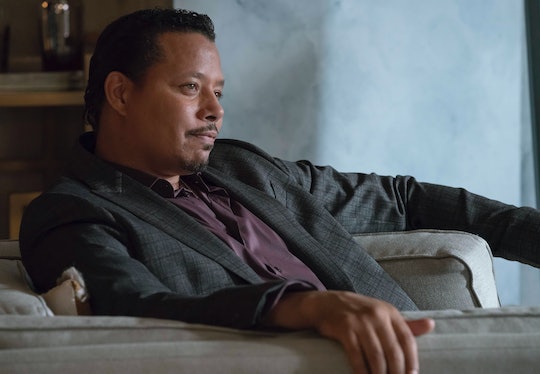 Is Diana Working With Lucious On 'Empire'? They Both Have Something To Gain

Let's be real for a minute here. Cookie and Angelo were pretty doomed from the beginning, and when his mother, Diana, came into the picture, they were still on shaky ground as a couple. And now that she met with Cookie's ex, is Diana working with Lucious on Empire? They both have something to gain out of the alliance. Diana wants Lucious to convince a journalist not to release a particularly scathing article about Angelo that is apparently somewhat fact-based. For Lucious, teaming up with Diana would mean getting the mayoral candidate out of Cookie's life, making room for him to slip in at some point. So for both parties, there is something major to gain, even if they'd be ruining the one good thing to happen to Cookie lately.

Lucious was, unsurprisingly, able to convince the journalist not to run the story about Angelo and when he brought that information to Diana, she wasn't ready to fulfill her side of the deal. This is of course because Cookie is actually good for Angelo's campaign since she is a lady of the people. But all Lucious wants, apart from Cookie, is to have all of the power. So even if Diana working with Lucious on Empire hasn't gone exactly right so far, you know he's got something else planned.

His first move was trying to get to Cookie himself, by giving viewers yet another Cookie and Lucious flashback to the good ole days, but she wasn't having any of it. It would be nice to think that Cookie is now impervious to Lucious's charm (is that what we're calling it?), but eventually, this Angelo train will likely come to a screeching halt and she'll somehow find herself back with the Lyon patriarch.

Somehow, Cookie and Lucious always end up finding their way back to each other. Part of it, according to Lucious when he spoke to Diana, is because they have children and a business together, but he's never been able to truly redeem himself on Empire. And really, will he ever?

The Season 3 Fall finale isn't the end of the season as a whole, but when Empire returns on March 22, there will likely be a whole new mess of story lines to get through and this whole Angelo/Cookie thing could be over and done with. So Lucious working with Diana may be the way for Taye Diggs to make his exit, unfortunately.