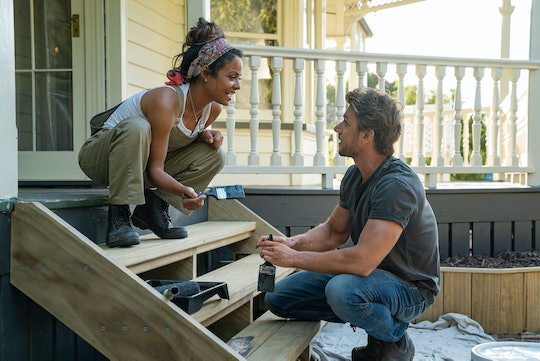 What do you get when you combine a city girl, a small town guy with a New Zealand accent, and a dilapidated inn won in a contest? It’s not a Hallmark romantic comedy, but Netflix’s Falling Inn Love definitely feels that way. It’s basically Netflix’s own version of the rom-coms we have all come to know and love. But because it’s such a genuinely funny and idyllic love story, you might find yourself wondering if Falling Inn Love is based on a true story. Unfortunately, it’s not based on two real life unlikely lovers who fall for each other while they renovate an old bed and breakfast. It might make you feel a little hopeful for your own love life, however, and that’s what rom-coms are here for.

Christina Milian stars in Falling Inn Love as Gabriela, a recently unemployed woman down on her luck who drunkenly enters a contest online to win an inn somewhere in the New Zealand countryside. It’s a far cry from the drunken online shopping I do at 3 a.m., but it ends up being the right move for Gabriela. She meets a local man, Jake (Adam Demos), who inevitably charms her and they fall for each other as they renovate the inn.

Falling Inn Love is one of those movies with an ending you can spot from a mile away. It’s also an adorable story put together by some big names in the entertainment industry, however, so don’t sleep on it.

Roger Kumble, who also directed Cruel Intentions and The Sweetest Thing, was brought on as the director for the Netflix rom-com and, Milian told BlackFilm.com, it was one of the reasons she was so attracted to the movie in the first place.

"I’m a fan of both films and his body of work, [so] that was special," she said. She also attributed her interest in the movie to being able to work on location in New Zealand and loving the script for its genuine humor amidst the obvious love story.

Although the Falling Inn Love writers, Elizabeth Hackett and Hilary Galanoy don't have movie credits quite like Kumble’s under their belts, they did both work on the romantic holiday comedy Fir Crazy, which was a Hallmark movie. So it makes sense why they were brought on to pen the screenplay for Falling Inn Love and why, for some viewers, it might feel reminiscent of classic made-for-TV romantic comedies.

What sets Falling Inn Love apart from other similar stories, however, is what Milian told People was her "impeccable chemistry" with co-star Demos. She said they worked so well together and their chemistry came across onscreen in a way to make the love story feel a little more authentic. She stressed that the comedy in the movie "spruced it up" and added something more to the love story. There’s also the recurring goat in the movie, who has its own attachment to the inn that Gabriela and Jake come together to renovate.

There’s no word yet on if Falling Inn Love will get a sequel, but since it’s not based on a true story, there’s an endless amount of directions the story could go from here. And Netflix can be generous with continuing stories adored by fans.

The 2017 romantic comedy A Christmas Prince was given a 2018 sequel called A Christmas Prince: The Royal Wedding and Netflix premiere a third movie to make it a trilogy, according to The Hollywood Reporter. If fans love Falling Inn Love as much as they loved the royal Christmas rom-coms, it could have a long future on Netflix.