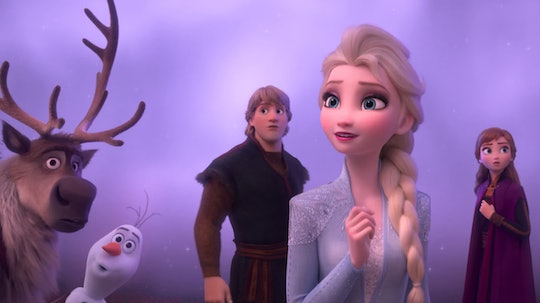 After months and months of anticipation, Frozen 2 is finally here. The sequel to the popular 2013 Disney film about two sisters, Princess Anna and Princess Elsa, will presumably be the hot ticket item over the weekend. But there are a few things parents might want to know about the movie before taking their youngest kids to see it. So if you're wondering if Frozen 2 is appropriate for kids under 5 years old, here's a little research to help you decide.

First of all, the new Disney film is clearly made for all ages. The strong female bond between Anna and Elsa is super empowering for young girls, then there's the comedic element of Olaf the snowman, the gorgeous animation, and even Anna's love interest Kristoff gets the chance to share some big emotions on the screen this time around. Also let's not forget the catchy music your kids will love singing for months to come. Will we ever forget "Let It Go" from the first movie?

While Disney has done an impressive job of making Frozen 2 enjoyable for both kids and adults with a PG rating, there are a few moments in the movie parents of young kids or sensitive little ones might need to watch for. First things first; Frozen 2 may be a bit long for some children. The movie clocks in at a running time of 1 hour and 43 minutes, so if you're bringing little ones you're going to want to make sure they can sit still for that long. In my personal experience, I have found doling out the snacks throughout the movie helps enormously.

Also, there are some sad moments in the second film. (If you have not yet seen the first movie, please note there is a spoiler ahead.) While Frozen lightly dealt with the death of Anna and Elsa's parents, Queen Iduna and King Agnarr, during the popular song "Do You Want To Build A Snowman?," Frozen 2 goes into more detail about the loss that some little ones might find upsetting.

Beyond the potentially upsetting scenes showing Anna and Elsa's sadness, there are a few anxious moments. For instance, as Cherish 365's review of the film noted, when Elsa is in the sea and meets a water horse or the group travels north to a new land and runs into some danger. These moments might cause a bit of anxiety, but I think as long as parents are well aware and watch their kids to ensure they're OK, it should be fine. Meanwhile, Common Sense Media notes Frozen 2 is best for kids 6 and up as it's "slightly darker" than the first, which the organization said was OK for children 5 and older.

Of course, every parent needs to make their own decisions about what their kids can watch, but I have a feeling it might be an uphill battle to avoid Frozen 2, which is in theaters everywhere tomorrow, Friday, Nov. 22.

More Like This
'Top Gun: Maverick' Is More Tween-Friendly Than The Original
20 Memorial Day Movies To Watch As A Family This Year
Kate Middleton Explains Why Her Kids Couldn't Attend The Top Gun: Maverick Premiere
'Hocus Pocus 2' Officially Has A Release Date To Look Forward To