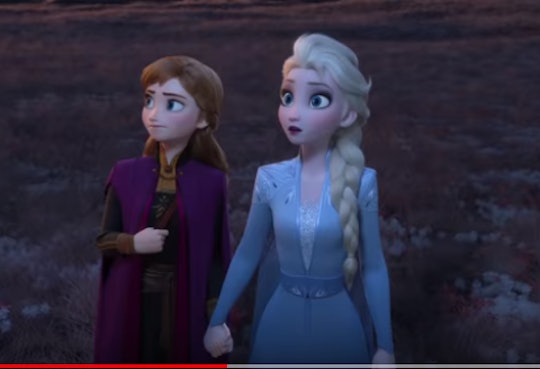 In just one week Frozen 2 will hit theaters and kids everywhere will be lining up to see their two favorite sisters again. The relationship between Anna and Elsa was one of the best elements of the first film since it offered little girls a chance to see the importance of prioritizing female bonding. Kristen Bell, who voiced Anna for both movies, was proud of that. But this time around, Kristen Bell is "proud" of Frozen 2's new song for a different reason. And as a mom of sons, I totally agree with her.

Frozen 2 sees the four main characters of the first film, Elsa, Anna, Kristoff, and of course Olaf the snowman, living peacefully in Arendelle. The two sisters are as close as ever, while Kristoff is trying to find a way to propose marriage to Anna. Without giving away too many spoilers, all of the characters get separated at one point. And this is when Kristoff, voiced by Jonathan Groff, gets his first big song called "Lost In The Woods." It's a rock ballad all about how he feels vulnerable and "lost" because he doesn't know how Anna feels about him. And as Bell told Entertainment Tonight, it's such an important song for little boys to hear.

Bell explained in the interview:

The thing I think I’m proudest of the way that they represented Kristoff. In the first one, it’s like two females, it’s great. But in the second movie Kristoff has a song that is going to blow your mind, sung by Jonathan Groff.

She went on to note that it's unusual in kids' movies for men to model such vulnerability for kids:

Little boys don’t often see representation of other boys having really big loving feelings. And there’s a line in the song that says ‘You feel your feelings and your feelings are real.’

I know exactly what she means. My four sons loved Disney movies and always looked for a song they could make their own when they were playing. For one son it was "Go The Distance" from Hercules, for another it was "I Just Can't Wait To Be King" from Lion King. They loved "You've Got A Friend In Me" from Toy Story as well. All great songs, of course, but none of them really allowed for the complicated emotions of feeling deep love stuff for another person and feeling unsure if those feelings are returned. They were mostly songs about succeeding in life, being the champion, that kind of thing. The "Lost In The Woods" lyrics include lines like "Oh, you’re my only landmark/So I’m lost in the woods/Wondering if you still care."

Frozen 2 doesn't just entertain kids with catchy songs, it subtly teaches them that it's okay to be exactly who they are. And what better message is there?

More Like This
Kristen Bell Just Hinted That 'Frozen 3' Is Maybe (Hopefully!) In The Works
Janet Jackson's Son Eissa Is A Little Musical Prodigy In The Making
Ciara’s Kids Make The Sweetest Cameo In Her New Song “Treat”
'Hocus Pocus 2' Officially Has A Release Date To Look Forward To