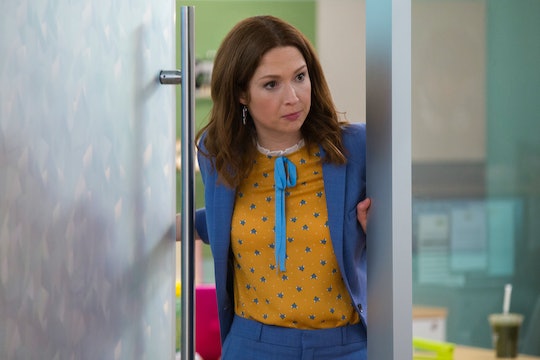 Is Giztoob From 'Unbreakable Kimmy Schmidt' A Real Company?

Throughout the first three seasons of Unbreakable Kimmy Schmidt, Kimmy was a nanny, a Christmas store clerk, a TaskRabbit employee, an Uber driver, and a college student (forgive me if I forgot one or two in there). Naturally, Season 4 finds her in yet another new place of employment, at least in the first few episodes anyway. So is Giztoob from Unbreakable Kimmy Schmidt a real company? Year-round Christmas stores exist and TaskRabbit is a real thing, along with Uber, so it wouldn't be out of the realm of possibilities for Giztoob to also be a real company in real life.

In the promo showing the new opening song and Kimmy heading into work as a young professional independent woman, you see her head into an office at Giztoob, which is very much a step up from any of the jobs she’s had before. Since it’s unclear what her actual job title is or even what the company does, and the fact that there’s no search results for the company online, it’s safe to say that this time, Kimmy’s workplace is totally fictional. Really, it could be akin to any number of similar tech startups, so it could still draw from real life companies. It does seem pretty relevant in terms of the atmosphere. Giztoob seems to be a startup tech company, complete with a variation of one of those Yuko robots that was featured back in season one.

At Giztoob, Kimmy does seem to have a certain level of authority. In the promo, her very techy looking boss bursts into her office and orders her to fire another employee, so things are kind of sort of looking up for our cheerful heroine. Since this is a tech company though, and something tells me Kimmy can barely navigate a flip phone, she probably won't last long in her current position. According to Ellie Kemper (Kimmy), though, it does offer an interesting storyline for the first episode.

"She is working at Giztoob, which is the funniest name, and she is sort of like the human component, because I think a lot of people who work there are maybe introverts, so Kimmy has been hired to be almost the face of the company," Kemper told E! News. "I think this is her first professional job, almost, and I think she's continuing her never-ending search to make the world a better place and right people's wrongs, and as always coming to terms with the fact that she can't save everyone."

Giztoob also offers Jacqueline a place to launch her talent business, Jacqueline White's White Talent (I know, I don't even know where to begin with that one) even if she’s doing it under the radar and in a way that she probably shouldn’t. That is, using one of the offices instead of paying for her own office space. You know, just Unbreakable Kimmy Schmidt things. On the plus side, it means that Jacqueline is trying to be about working for a living instead of making money as a trophy wife again. Although Douglas, her "yolo" spouting younger boyfriend is set to make an appearance in season four, so you never know where Jacqueline’s story will go.

It’s not clear how long Kimmy is meant to work at Giztoob or how big of an impact the fictional tech company will have on the show this season, but like Kemper said, it does give Kimmy a jumping off point to finally begin her life as an adult. It’s like we’ve watched her grow from this goofy socially immature person from season one into a goofy and still amazing cheerful adult person in the show’s final season. And I, for one, am totally here for it.