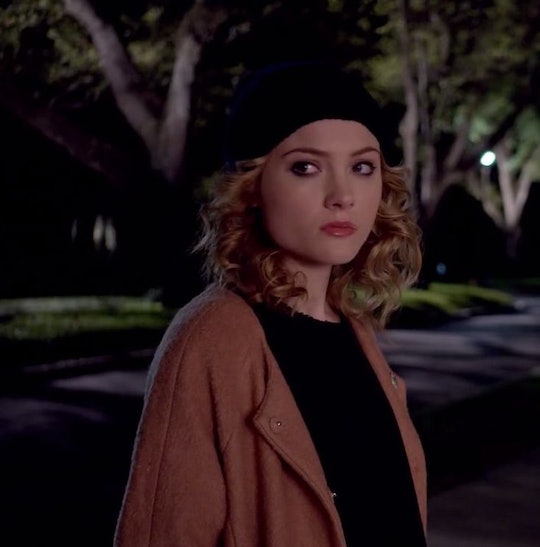 Is Grace The Green Meanie On 'Scream Queens'? Fans Are Still Asking Where She Is

So far, there have only been four episodes of Scream Queens Season 2, but that hasn't stopped fans from asking all of the important and burning questions. Like, who is the Green Meanie? And, is Cassidy Cascade a vampire? The answer to both of those is, so far, inconclusive, but the most important thing fans have been wondering about is whether or not Grace will make a surprise appearance this season. And if she does, will it be as a friend or as a foe? On a show like this, you can never be too sure. Last year's heroine could very well be this year's villain. So, is Grace the Green Meanie on Scream Queens?

Skyler Samuels (Grace) has said on more than one occasion that she wouldn't be returning for Season 2 of Scream Queens and that she was using her time off from acting to return to Stanford and finish her degree. Now, that's all well and good, but that doesn't help fans of Scream Queens from filling that Grace void in their lives. Because who would have thought that viewers would actually miss those terrible hats and blond ringlets? In some ways, the best thing about Grace was her dad (Oliver Hudson), but to have her show up as a big surprise guest in the last couple of episodes of Season 2 would be too good to pass up.

The last time viewers saw Grace, she was one of the survivors of the Red Devil attacks at Wallace University, along with three of the remaining Chanels and Zayday Williams, her BFF. When Season 2 of Scream Queens premiered, Grace was nowhere to be found and no one even mentioned her. Not even a simple explanation like, "Oh Grace is laying low with her dad now," or "She moved away." Instead, Scream Queens seems to have taken the approach of ignoring the character's existence completely.

But what if that's only to make Grace's return to Scream Queens that much more of a shocker? Grace was one of the students who was relentlessly pursued by the Red Devil last season, and narrowly escaped with her life many times. What if all of the murder got to her and made her into a killer herself? Perhaps Grace has gone crazy and come back to get revenge on not only the Chanels, but also everyone else connected to Wallace University, including Dean Munsch, who dated her dad for a little while too.

So far, the deaths have negatively affected almost all of the returning cast, meaning that if Grace is the Green Meanie, she could be saving them all for last. For example...

When the Green Meanie killed the patient who had spontaneous orgasms (Cheri Oteri), the killer conveniently left Zayday alive and only wounded Cheyenne, the candy striper. That death is one that the media would actually know about, since the patient had said moments before that she already told a reporter about her experience at the hospital. So that one negatively impacts Dean Munsch.

The First Death Was Linked To The Chanels

In the first episode, a patient (Cecily Strong) was murdered right in front of Chanel No. 5, but she, herself, remained unscathed. This pointed some of the blame on her almost immediately, even though the case was quickly closed with what was supposedly little-to-no evidence.

Chanel No. 5's Boyfriend Was Murdered Too

Chanel No. 5's boyfriend was murdered soon after they became a thing. Once upon a time, it might have seemed totally out of character for Grace to be so ruthless, but like I said, the events of Season 1 could have majorly changed her.

Chad Radwell's Murder Was Bigger Than You Think

By killing Chad Radwell, Grace would not only hurt Chanel Oberlin, but also get rid of one of the awful frat guys from Season 1 who had done nothing for the pledges of Kappa Kappa Tau. As the Green Meanie, Grace would be enacting a sort of poetic justice.

I said it once and I'll say it again — Zayday could have been killed, along with Lynn, or at least wounded like Cheyenne was, but the Green Meanie chose to leave her unharmed. Who else would do this but her former BFF, Grace? Even if Grace is the Green Meanie on Scream Queens and means to kill her later on, that still speaks volumes about the possible identity of the killer.

Hester's Cryptic Clues Could Have A Deeper Meaning

Hester keeps telling Dean Munsch and the Chanels that the clues are right in front of them and that the killer is too. Grace may not have appeared in Season 2 just yet, but she is one person no one has named as a suspect or even mentioned at all. This would make her reveal that much more shocking and amazing for viewers.

When it's all said and done, though, and the 13 or so episodes of Season 2 are over, is Grace the Green Meanie? While technically speaking, Samuels hasn't been mentioned in the cast or guest star list at all, that's just part of what would make it the perfect surprise.

More Like This
13 Celebrity Parents Who Also Raise Chickens At Home
Jennifer Lawrence Just Kinda, Sorta Revealed The Sex Of Her First Baby
Am I Ready For A Baby? 9 Questions To Ask Yourself
Everything You Need To Know About Kroger's Memorial Day Hours