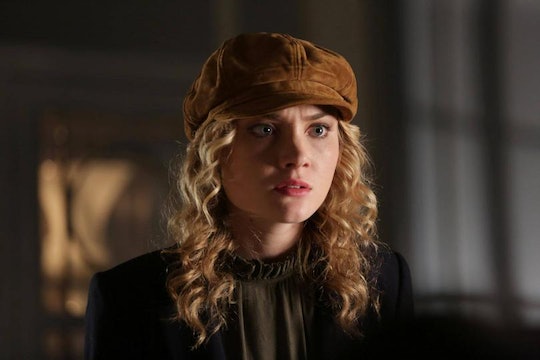 Why Isn't Grace On 'Scream Queens' Season 2? Skyler Samuels Is Missed By Many

Although we were given literally no information about Grace on Season 2 of Scream Queens, fans are still wondering whatever happened to our former heroine who was basically at the center of last year's plot? This season, we welcomed back a lot of the former cast, but Skyler Samuels has been noticeably absent, so why isn't Grace in Scream Queens Season 2? Way back in December of 2015, right after Season 1 of Scream Queens aired, Samuels decided to return to Stanford in order to finish her degree, almost directly after the season ended. Evidently, she had already taken a semester off to film the first season of Scream Queens, so while Season 2 was filming, she was doing just that.

But that doesn't mean that we haven't felt the weight of her absence, especially where fellow sorority sister Zayday is concerned. The two were basically best friends during Season 1, so to have Zayday return without any mention of her former BFF Grace really had fans trying to guess where Grace is these days. And, of course, there has been plenty of speculation about whether or not a surprise return could be in store regarding our favorite terrible hat-toting hero, since Ryan Murphy is nothing if not secretive with both his fans and his casts.

In December of 2015, Samuels told Elle that she'd be returning to school in January to finish up and that she'd be "getting [her] degree one way or another." So that much is true, but is there any truth to the many fan theories that Grace will return to Scream Queens Season 2 and surprise us all? Although it would be nothing short of amazing to have the big reveal of the Green Meanie turn out to be a now-deranged Grace — because teaming up with Hester to get back at the Chanels would actually make sense — it might just be wishful thinking on our parts. (Sorry, theorists!)

The IMDB page for Scream Queens doesn't list Samuels for this season and, more importantly, there haven't been any suspicious sightings of her on-set, but we can dream, can't we?

The reason why Grace isn't in Scream Queens Season 2 is simply because of scheduling conflicts and Samuels wanting to finish her degree before she got back into acting. And while that's totally understandable, it doesn't make it any easier to bear. Who would have known that we'd miss those yellow-blonde curls and awful berets so much?