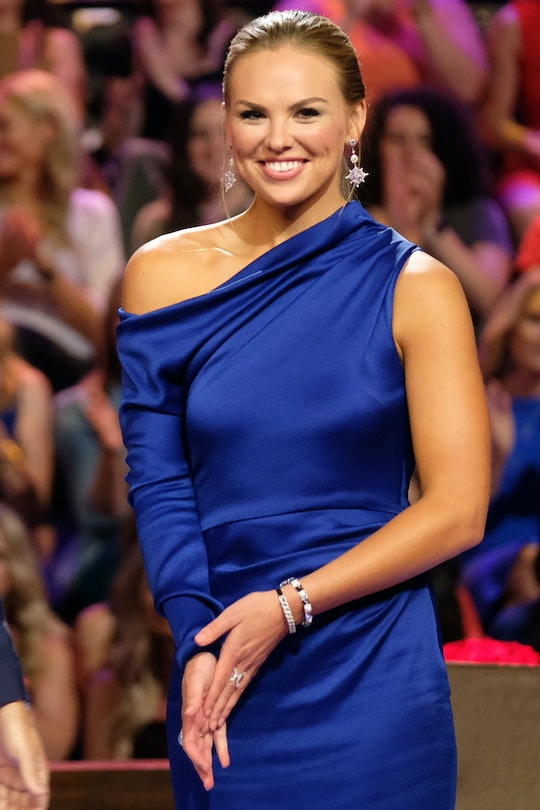 Hannah Brown Could Still Be Single After 'The Bachelorette'

The point of The Bachelorette is to find someone to fall in love with and get engaged to by the end of the season, but that’s not always the case. Hannah might have found that with either Tyler or Jed, and both men seemed head over heels for her at the end of part one of The Bachelorette finale. If Hannah Brown is single after The Bachelorette, however, it means the process didn't work for her and neither man turned out to be the love of her life.

Although spoilers for Hannah’s season started to leak before The Bachelorette even premiered this season, the one thing which has remained under wraps is whether or not Hannah got engaged and stayed engaged at the end. Her season had a few wild card contestants and it made for some unexpected turns, a lack of rose ceremonies and cocktail parties, and some uncertainty surrounding Hannah’s happy ending.

Even going into her final rose ceremony in part two of The Bachelorette finale, Hannah seems conflicted on what her next move should be. In a promo, she is shown getting out of a car and falling in heels in the middle of the street while feeling overwhelmed about the decision ahead of her. Choosing between two men you are falling in love with has to be hard, but clearly, it was a lot for Hannah to handle and it might have had some bearing on if she stayed single or got engaged.

If Hannah chose to allow Jed propose to her, for example, then there isn't a great chance of them still being together. Jed’s ex-girlfriend told People she and Jed were together the entire time he was on The Bachelorette and he had gone on the show for exposure for his music career rather than to fall in love with the Bachelorette. If there is any truth to her claims and Hannah dug deeper into it post-Bachelorette with Jed, then I doubt she’s still with him. Even if Jed legitimately fell in love with her, one of the cardinal sins a contestant can commit on The Bachelorette is being there for the wrong reasons.

On the other hand, if Hannah chose Tyler, then I am a firm believer the two ran off into the sunset and are happily engaged. Maybe that’s just the Tyler fan girl in me, but he has proven himself to be a devoted and genuine guy this season and I believe he went on the show with the intention of finding a future wife. If Hannah allowed him to propose to her and accepted his proposal, then I see no reason why they wouldn't still be together.

However, Hannah herself might have given away how her journey on The Bachelorette ends. Toward the end of part one of the finale Monday night, she said, "The past couple of months have been really tough and emotional. I know there are a lot of rumors out there. Honestly, tomorrow night, I have a lot of questions that need to be answered."

She also told Entertainment Tonight at the "Men Tell All" taping her heart gets broken "for a lot of different reasons" this season. She could have been referring to the way Luke disappointed her with his behavior or the fact that she had to send Peter home because her feelings weren't strong enough for him.

Right now, it could honestly go either way. I hope Hannah found love because it is what she deserves after struggling with her feelings and with some of the men this season. I’m just not sure if she got everything she wanted out of the season and that includes a lasting engagement.