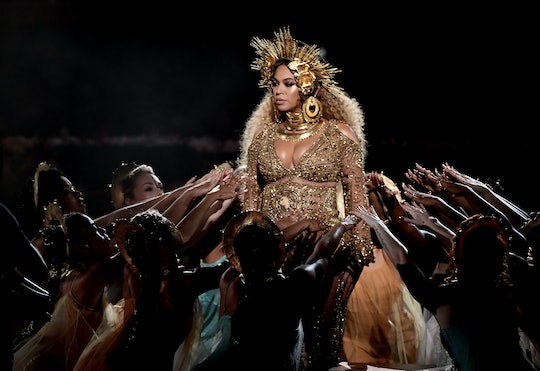 Beyoncé's twins are finally here, but there's a lot the world still doesn't know about the newest members of the Carter family. According to TMZ, the latest news is that the twins were premature and have been "under the lights," meaning they're most likely being treated for jaundice, which is caused by high bilirubin counts. But is high bilirubin dangerous? How does this affect the twins?

TMZ hasn't updated fans on the specific condition of the twins, but noted that the condition is not really dangerous. In fact, it's incredibly common in both preemies and full-term babies. According to the Mayo Clinic, high bilirubin is the main cause of jaundice, which causes a baby's skin and eyes to take on a yellow tint and appear discolored. Bilirubin is "a normal part of the pigment released from the breakdown of 'used' red blood cells."

Sounds like some kind of scary sci-fi film, right? The truth is, high bilirubin counts are fairly common and treatable. The American Academy of Pediatrics (AAP) noted that these high counts occur most often when a baby's immature liver is not yet equipped to efficiently remove bilirubin from the bloodstream. Babies who are born early and babies who are breastfeeding (especially those who aren't breastfeeding well) are most at risk of developing jaundice from high bilirubin counts.

So is high bilirubin dangerous? Not usually, but it can be, noted the AAP. If the levels are extremely high and not treated effectively, it can lead to brain or nervous system damage.

TMZ reported that Beyoncé's babies were "under the lights," which means their treatment is probably very effective. The University of Michigan suggested that more than 50 percent of babies experience high bilirubin and going "under the lights" is one of the best ways to treat it. The phototherapy treatment is a process that shines light directly on an undressed baby (they do have eye protection) to eliminate the bilirubin in the blood by having the baby's body and skin absorb the light, which then turns the bilirubin into "products" that can pass easily through your baby's system. Because of this, one of the side effects of phototherapy is an increase in baby's bowel movements.

While details are still scarce, if Beyoncé's babies are simply "under the lights," you can assume that their bilirubin counts haven't reached a dangerous level. According to The University of Michigan, the most dangerous type of jaundice happens when the mother and baby have different blood types, leaving a mother's body to produce antibodies that destroy the newborn's red blood cells. Even in this extreme case, the jaundice is treatable if a mother receives an injection of RhoGAM within 72 hours after delivery to prevent her from producing the antibodies.

In general? Beyoncé's babies don't seem to be in any immediate danger as high bilirubin counts aren't exactly dangerous. Doctors will want to keep an eye on bilirubin counts to make sure they don't get too high, but if any baby, including Bey's, is "under the lights," they're being treated effectively for the condition. It's a common issue in newborns, and it shouldn't cause too much concern.

Good luck to the Carter family and those sweet babies. They've been in the spotlight since they were conceived — a few extra days of light for high bilirubin shouldn't be too big of an issue.