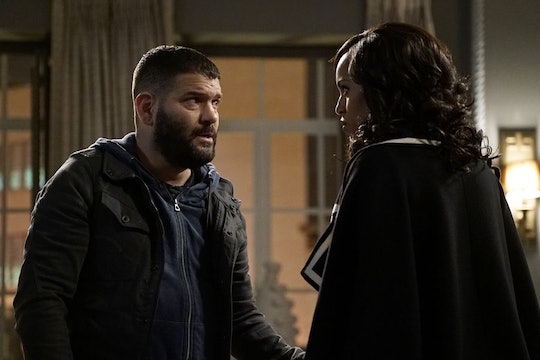 Huck's In A Lot Of Trouble On 'Scandal'

Plenty of Scandal fans will argue that a lot of the core characters on the series have been through and survived a lot worse than what Huck is going through now, but that still doesn’t put much of the collective worry to rest. Since it’s also a show that isn’t afraid to shock and surprise us, is Huck alive on Scandal?Right now he seems to be, but for how much longer? The last we saw, Huck had been shot by his supposed girlfriend Meg, who also turned out to be a trained and merciless killer. But in the promo for Episode 9 "Dead in the Water," Meg is shown shoving him into a trunk and apparently trying to push the car over the edge of a cliff.

At this point in time at least, Huck seems to still be alive. But how long can he last with three bullet holes in him and zero medical attention? If Meg is anything like Huck though, she knows how to keep someone alive while torturing them. She didn’t torture him, per se, but she’s definitely on Huck’s level of having a lack of empathy and having a devotion to her cause. In this case, that cause would be the secret organization that very much seems like the new B613.

Huck has never been a stranger to torture or killing who needs to be killed, so he and Meg definitely have that in common. But now that Huck is totally out from the clutches of B613, he’s less of a killer for hire and more of a killer for Olivia. He’s been playing on the side of the good guys for a while now so if Huck dies on Scandal, that’ll be the very opposite of any kind of payoff.

Shortly after the big scene where Meg shoots Huck and seems to leave him for dead, Guillermo Diaz spoke to Entertainment Weekly about his damaged fictional counterpart and assured viewers that "there’s hope for Huck." He also told the outlet, "He’s a former trained killer spy who lived in a hole for three months. He’s been through a whole Hell of a lot, so I’m hoping that he will have that inner strength to make it through this, but we’ll have to wait and see."

That last part is obviously meant to worry fans, but I think it’s pretty clear that Huck is alive and likely going to pull through as long as Olivia and Co. can track him down in time. You know, before that car is pushed over a cliff with him in the trunk, still likely bleeding from those three bullet wounds.