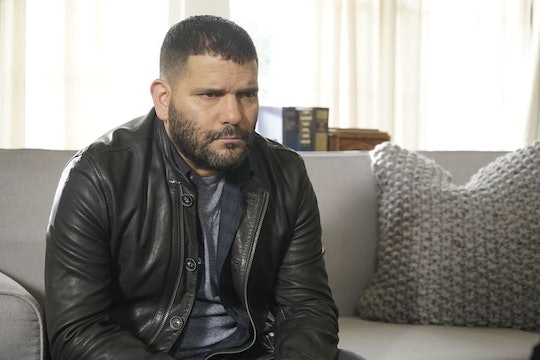 Finding out that almost everything revolving around Frankie Vargas' death on Scandal was sort of because of Abby was definitely mind blowing, but the biggest part about Thursday's episode was the lack of Huck. Like, what's going on and what happens to Huck on Scandal? He doesn't have much time left if he's alive and if the Episode 9 promo isn't a red herring, it looks like Meg's goal is to dump his body. The body that, mind you, still contains several of the bullets she shot into it. But Huck's still alive, we just don't know yet what condition he's in as of right now.

It's also important to remember now that Abby's original motive for giving away the fact that Jennifer Fields is alive wasn't to hurt Huck in any way and it seems like all she wanted to ensure was that he had no idea she was even involved with that super secret organization. And, as Meg assured her, Huck had no idea that Abby is tied to literally everything. But judging by the promos for the Season 6, Episode 9 of Scandal, Abby and everyone else is looking for him. Unfortunately, Meg is a lot crazier than anyone has really given her credit for and it looks like she's ready to push a car over the edge of a cliff with Huck's weakening body in the trunk.

It's hard to believe that after all of this, Huck will die on Scandal, but they're probably going to cut it pretty close as Olivia & Co. race against time to find and save him. They know that Jennifer Fields is dead and that Huck is simply missing, but if they have any hope of saving him, they better find him and fast.

Guillermo Diaz told E! News that although Huck's life is hanging in the balance right now, "He is a former trained killer spy who lived in a hole for months. So I'm hoping that he'll have the sense and strength to get through what just happened to him."

Since there are seven more episodes in Season 6, Huck will likely be found next week, just in time for everyone else to finally face the mysterious organization that has been powerful enough to not only control Rowan Pope, but also every facet of the White House, or so it seems. I don't know what shape Huck will be in when they finally find him, but there's no way he's going to die after all of this. Right?!