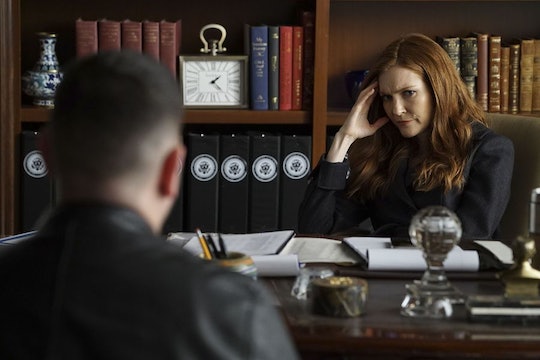 It’s official. No one can ever truly be happy in Shondaland. At least, not for too long, anyway. Huck finally found a seemingly normal girlfriend who legitimately seemed like someone who could be good for Huck and make him happy. Then she shot him and possibly (but probably not) killed him. It was all at the orders of Abby though, so as worried as I am about Huck, the bigger question here is: why did Abby order Huck to be killed on Scandal?

She went for a major power play on Episode 7, asserting herself as the next big bad along with that mysterious organization currently ordering Papa Pope around, but maybe the goal wasn't to kill him at all. Still, Abby ordering any kind of hit on Huck (freaking Huck) is almost too much to bear. In an interview with Entertainment Weekly, most of the cast of Scandal made it clear that Huck most likely survives the multiple gunshot wounds, but even as he recuperates, the remaining members of OPA are not going to just sit on the idea that Abby was behind his attempted murder, if that’s truly what is going on here. There’s obviously going to be something of a war ignited.

There’s hope for Huck. He’s a former trained killer spy who lived in a hole for three months. He’s been through a whole hell of a lot, so I’m hoping that he will have that inner strength to make it through this, but we’ll have to wait and see.

But when it comes to Abby and how she factors into everything, things could get really messy. Like, messier than bleeding out after being shot by your girlfriend messy. If Abby is working for the new B613-like organization in control, then it’s all about eliminating those who know about the organization's involvement in Vargas’ death. Since Jennifer Fields was one of those people, they had Meg kill her. And since Huck was the one who brought Meg to Jennifer and witnessed the execution, he had to be taken out too in order to tie up any loose ends. But, as fans have all been hoping and praying, Huck will probably survive and come out of this ready for some serious vengeance.

Darby Stanchfield (who plays Abby) revealed during the same interview that not only will Episode 8 reveal why Abby ordered Huck to be killed on Scandal, but also "how involved she is in everything that’s going on with Election Night— Frankie Vargas’ death, all of that." Um, excuse me? So not only has Abby been corrupted to the point of ordering a hit on someone who was once one of her closest allies, but she also may have played a role in Vargas’ death? Abby's involvement with this group is clearly extensive.

Wanting power has been part of Abby’s deal for a while now, since she left OPA for the White House, so that part isn't super surprising. But now it’s becoming clear that she may be too far gone for even Olivia to change her back to the Abby she was before. I can only hope that this week's episode will help viewers understand the reasoning she has behind these shocking actions. Only time will tell.