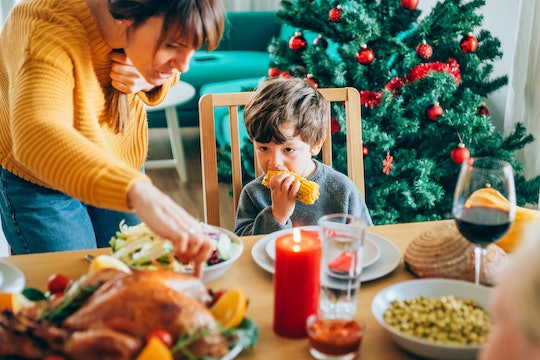 Of Course It's Okay To Decorate For Christmas Before Thanksgiving

To deck the halls pre-Turkey Day, or to not deck the halls quite just yet... that is the question. Every year, it seems, there's a debate about the best time to bust out the tinsel. Is it okay to decorate for Christmas before Thanksgiving? Or is this in fact a crime against the holiday gods, for which offenders should be publicly shamed and forced to heave their reindeer inflatables straight into the sea?

Personally, I always feel a little bonkers when I head into a Walgreens the day after Halloween to be greeted by Christmas trees and an animatronic Mrs. Claus. It causes a bit of seasonal vertigo, where I'm like, "Wait... isn't there a bucketful of freshly trick-or-treated Tootsie rolls sitting on my counter at this very moment? Why am I looking at Rudolph? Did I miss Thanksgiving? Have I just emerged from a coma?" It can all feel like too much too soon...

But for some, the holidays needed to get here yesterday. These people are ready to go the second that clock ticks into Nov. 1., like HGTV star Joanna Gaines, who had her tree up a full two weeks before T-giving.

And then there's Texas couple Claudia and Nick Simonis. As Today reported, they positioned their inflatable St. Nick-in-a-helicopter outside their home the day after Halloween, along with a snowman and reindeer. (In the couple's defense, the wife is pregnant, and her due date is literally Christmas day. So, understandably, she maybe just wanted to get one more holiday to-do off her list before her life exploded into total chaos.) The neighbors, however, were not at all amused with what they considered seriously premature yule tidings. They issued the couple a notice that it was far too soon for helicoptering Santas, and would they please stuff Frosty etc. back into the garage? To which the couple said: Seriously?

My husband and I watched this story on the news, and we totally came down on different sides of the issue. As I said, I am totally fine waiting for December to get into full-on holiday mode. But I also don't take issue with anyone who wants to display their Polar Express ornaments in November. (Or July, for that matter. Live and let live, no? ) My husband, however, is a no-Christmas-decorations-until-December hardliner, and thought the couple should be forced to let the air out of St. Nick. "I don't need to see Santa before Thanksgiving," he grumbled. (To be honest, I think he'd be fine seeing Santa never, as he finds Christmas to be an overly commercialized day of global waste. But he's just fun that way.)

Still, I side with the couple in asking: what's the harm? Because really, there isn't any. Not only is there no harm, there is even scientific evidence which suggests that putting decorations out early actually makes people happier. Business Insider quoted psychoanalyst Steve McKeown as saying: "In a world full of stress and anxiety people like to associate to things that make them happy and Christmas decorations evoke those strong feelings of childhood. Decorations are simply an anchor or pathway to those old childhood magical emotions of excitement. So putting up those Christmas decorations early extends the excitement!"

And lest we forget, a large part of holiday decor has always been about curing the wintertime blues. As LiveScience explained, pagans were the ones who originally were like, "Dude, winter blows. Let's have a party with lots lights and totally cheer ourselves up!"

So, maybe you're just someone who could use a little wintertime boost a little earlier than the rest of us. Maybe you've been a bit down. (Or own a television and have watched the news oh, I don't know, ever.) Well, then, you might feel a little inclined to wrap your house in tiny blinking lights. Or your car. Or yourself. And that is a-okay. While I don't know what Martha Stewart has to say about it, science says to go for it. As does Better Homes & Gardens. And there's no questioning Better Homes & Gardens when it comes to Christmas, y'all.