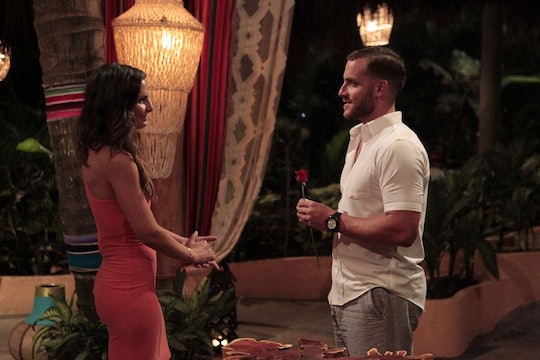 Is Izzy Single After 'Bachelor In Paradise'? She Definitely Started Something On The Show

Someone recently tweeted at Izzy Goodkind from Bachelor In Paradise about being a genuine person on the show, and the more you think about it, the more that's pretty spot on. On the Season 3 premiere, she tried to get to know Daniel, who immediately started tossing out the rude and negative comments, which she was smart to just walk away from, so thank the Bachelor gods that nothing was sparked there. Still, is Izzy single after Bachelor In Paradise? Luckily, she ended up going from Chad Jr. to someone I wouldn't say no to being the next Bachelor, should he be single after the show — Vinny. And obviously it's hard to judge a relationship in its infancy, when it starts off on the season premiere of Bachelor In Paradise, but the two of them together makes so much sense that I will bang down Chris Harrison's door if they aren't still together after Bachelor In Paradise.

That being said, the relationship status of Izzy on Bachelor In Paradise obviously can't be revealed for sure since Season 3 just started and they wouldn't want to let any huge coupling spoilers out of the bag just yet. But if Izzy Goodkind is single now, it's kind of unfair, because she may be the realest of all of the women on Bachelor In Paradise and she deserves some true love that goes beyond making out in the ocean.

Izzy first appeared in the world of The Bachelor on Season 20, which was Ben's season and also featured the most recent Bachelorette, JoJo Fletcher, so she hasn't been laying in wait for too long before being asked to join the ranks on Bachelor In Paradise. She was also part of the first group to be eliminated on Season 20 of The Bachelor, so finding love this time around isn't exactly mandatory, but it would certainly be nice for her to walk away with something substantial.

It's hard to say whether or not Izzy is single after Bachelor In Paradise, because Vinny's social media life has also been pretty quiet about his relationship status. Now, that's not to say that the two could have ended up going for totally different people all together, but I like to think that this potential couple blossomed into something more after their initial meeting on the season premiere.

Both Vinny's and Izzy's Instagram profiles have photos of them with different Bachelor In Paradise friends, but that's to be expected after spending several weeks essentially on vacation with these people. The important thing, though, is that Izzy hasn't made any mention of being with anyone else, and on Twitter, she definitely promoted the #TeamVizzy hashtag.

Later on in Season 3 of Bachelor In Paradise, we should also expect to see Vinny pronounce his love for Izzy, so let's hope that whatever they share on the show ends up translating to real life.