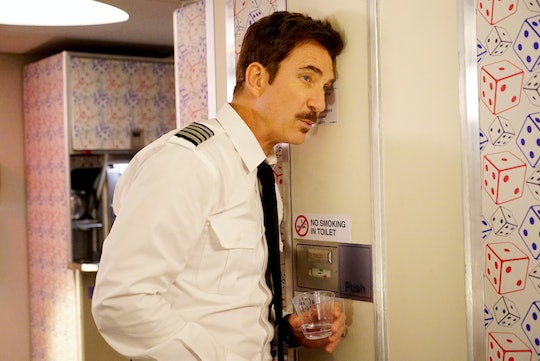 'LA To Vegas' Has An Interesting Flight Crew

An all new comedy series is coming to FOX. LA to Vegas follows a flight crew on Jackpot Airlines, a low budget airline that solely does roundtrip flights from Los Angeles to Las Vegas. So is Jackpot Airlines from LA to Vegas a real airline? Although it sounds like a fun ride to participate in, Jackpot Airlines doesn't seem to be real, but there are some similar airlines.

Low budget airlines do exist even though Jackpot Airlines doesn't. For example, if you were actually looking for a cheap roundtrip flight from Los Angeles to Vegas, you could get one for only $79 from Spirit Airlines. So while Jackpot itself may not be real, it could've been based on a real airline. It's hard to say for sure though.

Regardless, it's probably best Jackpot is purely fictional because based on the trailers for LA to Vegas, this does not look like a safe airline to be flying with. In one clip, the captain of the plane, Captain Dave (Dylan McDermott), is seen sitting at the bar asking for another drink before saying that he'll be "wheels up" in 10 minutes. When everyone looks at him with concern, he claims he's only drinking club soda before making a gesture to the bartender that indicates he is, in fact, drinking alcohol.

Captain Dave also doesn't mind just walking around the plane from time to time and when called out on the fact that he should probably be flying the plane, he argues the plane can fly itself. He also jokes about getting high in the cockpit and hooking up with women in there too. Meanwhile, the only reasonable person on the crew, Ronnie (Kim Matula), seems to lose her cool in the pilot episode as well.

As a flight attendant Ronnie hoped to travel the world but being stuck on a plane that only goes from Los Angeles to Vegas gets her so frustrated that she abruptly decides to quit. She then steals a bunch of alcohol from the hospitality cart and finds herself a seat on the plane, where she meets Colin (Ed Weeks). The two then decide to try and join the Mile High Club, before Captain Dave, who should really be flying the plane, interrupts them by knocking on the bathroom door.

So it's clear Jackpot Airlines isn't the best airline to take. They're not really concerned with safety regulations and the flight attendants can just quit on a whim. All in all, it's definitely not the kind of plane I'd want to be on, but then again, this is all for the sake of comedy, right?

Besides the hijinks on the plane, there's actually more to the show than just what happens on Jackpot Airlines. Ronnie actually ends up in a "location-ship" with Colin, who's a regular on the airline since his son and almost ex-wife live in Vegas and he's an economic professor. My guess is Jackpot is the only airline he could afford to take regularly.

There are also some other regulars on Jackpot, including Nichole (Olivia Macklin), a part-time stripper who's smarter than people give her credit for. Then there's Bernard (Nathan Lee Graham), who's basically the opposite of Captain Dave. Bernard is a career flight attendant who thinks the flight from Los Angeles to Vegas is actually magical and somehow always finds a way to remain positive.

This ensemble cast definitely seems like it could really take off, but you can see for yourself when LA to Vegas premieres Tuesday, Jan. 2 at 9 p.m. EST on FOX.