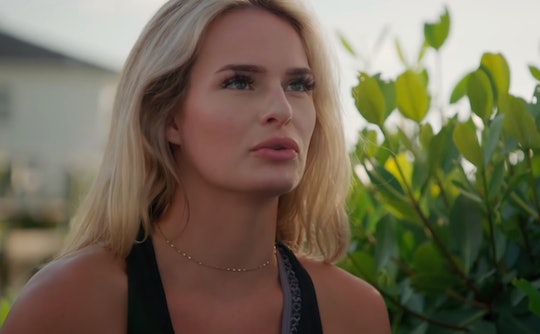 Juliette Could Finally Be Over Alex's Drama On 'Siesta Key'

It's no big secret that Juliette and Alex have had a rocky relationship on Siesta Key this season. Things went from bad to worse when multiple women from Alex’s past showed up and even if he and Juliette hadn't already had problems prior to that, there would have been issues. Now, they seem close to breaking up (again) and fans are wondering if this means Juliette is single after Siesta Key.

The latest drama to hit the Key is that another woman slept in Alex’s bed, which prompted him to run out and buy all new bedding for some reason. While Chloe and Juliette were both suspicious of this initially, Juliette backed down and decided to believe Alex for now that it was a platonic sleepover. But this isn't the first time Alex has been accused of cheating and he even said in last week’s episode that he could potentially cheat on Juliette without her ever finding out. I’d say that’s grounds for breaking up or at least taking a break.

Right now, it seems like Juliette may have chosen to do just that. There are no recent photos of her with Alex on her Instagram and in a recent photo of her hanging out on the beach, Kelsey commented, "Carefree looks good on you. Girls trip ASAP." It certainly sounds like she and Alex aren't together after Siesta Key and honestly, it might be for the best.

Alex and Juliette also aren't following each other on Instagram anymore. That could be to drum up some speculation among fans, especially since they are in between shooting seasons of Siesta Key right now. Or, it could be because they have finally called it quits after so many months of being on and off again.

The most recent picture of the two of them on her social media is from September, but since then, there has been no sign of Alex anywhere on Juliette’s Instagram. Which, judging by the fan comments about Juliette breaking up with him, might be the best thing for her right now.

But it’s not just Alex who Juliette seems to have distanced herself from. There aren't any potential boyfriends in her recent Instagram posts and judging by all of the selfies and photos with her friends, it looks like Juliette is trying to live her best life without the drama that comes with a boyfriend in Siesta Key. And although Alex has done his share of girlfriend hopping since Season 1, I shudder to think of how he might react if Juliette does move on to another boyfriend before he moves on first.

Spencer Pratt (remember him? He’s basically the original Alex, who is kind of/sort of reformed) spoke to Cosmopolitan about last week’s episode and saw some major red flags in Alex and Juliette’s relationship. He noted that Juliette almost seems like she’s fine dating Alex for the show, but might prefer to keep her distance from him romantically between seasons. That could be the case, especially since all of the Alex drama is honestly so exhausting. Pratt also said that Juliette is continually "getting walked all over by Alex" and I can't say I disagree.

It does seem like Juliette and Alex are broken up, at least for right now, and that Juliette is single. That could change when they are forced to film together if the show is picked up for Season 3. Nothing says "let’s give this a fifth try" like starring in the same reality show together and being part of the same social circles. But to be honest, right now it might do Juliette some good to continue to focus on spending time with friends, at least until Season 3 starts filming.