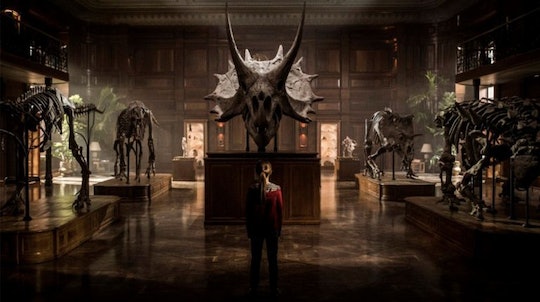 You Might Want To Reconsider Taking The Kids To See 'Jurassic World: Fallen Kingdom'

The wonder of the Jurassic Park franchise has always been the way they bring dinosaurs to life on the big screen. While many kids have enjoyed watching the movies over the years, the latest installment, Jurassic World: Fallen Kingdom, might not be their favorite. As a parent or guardian you might be asking yourself, is Jurassic World: Fallen Kingdom appropriate for children under the age of 10? After seeing the movie in an advance screening, and as a longtime fan of the franchise, I'm going to have to go with definitely not. Sorry, kids.

While Jurassic World: Fallen Kingdom is plenty of fun to watch, especially in IMAX, it is also probably the scariest film in the franchise. Mild spoiler alert: Fallen Kingdom brings dinosaurs to a place they've never quite been before — the United States. Not only are the dinosaurs brought to a highly populated country, but some of them get loose inside a massive mansion and wreak absolute havoc on it's residents. One of those residents happens to be a little girl, Maisie Lockwood, and this may top any monsters in the closet or under the bed your 10 year old might currently be afraid of. Dinosaurs seem cool from afar, but it's pretty safe to assume you don't want your 10 year old (or younger!) having nightmares about a T-Rex trying to snatch him out of his bed in the middle of the night.

To add to that, the wonder of seeing dinosaurs come to life on the big screen might be lost in young children due to the fact so many of them die in this film. When the movie starts, we quickly learn that the island that houses the dinosaurs, Isla Nublar, is being destroyed by a newly active volcano. The humans are given a very small window of time to save as many of them as possible, but unfortunately many of the dinosaurs are left to fend for themselves — and we're forced to watch as they meet their end. While the film is not particularly gory, it's heartbreaking to watch these innocent creatures be destroyed by Mother Nature.

Understandably so, this may not be an easy thing for children to watch. While dinosaurs were once big, scary creatures back when they ruled the world, seeing them come to life on the big screen is a whimsical and exciting experience for kids. To ruin that experience by allowing them to watch so many of their favorite creatures die could be mildly traumatizing, to say the least.

In short, it's safe to say that Jurassic World: Fallen Kingdom is a movie for grown ups. However, as the parent/guardian to the 10 year old (or younger) kid in question, you know better what he/she can or cannot endure seeing on film.

As for the grown ups, if you're looking for an Oscar-worthy masterpiece of a film... Fallen Kingdom is not for you. As you might have already seen, reviews for the film have been less than flattering. But here's the problem with that: it's a movie about dinosaurs. We watch and enjoy the Jurassic Park films, and others like it, for the escape. They are exciting, fun, and a wonderfully welcome distraction from the perils of the real world. Not every movie that comes to theaters needs to be a masterpiece, you know? Sometimes it's okay to just eat some popcorn, cry over a dinosaur, and root for the good guys to win in the end.

So, there you have it! While Jurassic World: Fallen Kingdom might not be appropriate for your kids, it's definitely worth grown ups checking out if/when you have some free time to squeeze in a movie.