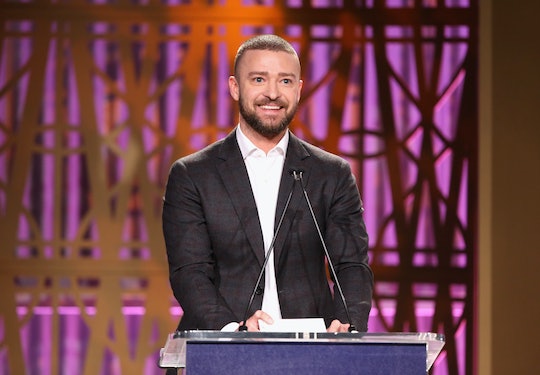 Here's Why It's Possible That Justin Timberlake's Son Is At The Super Bowl, Too

It still kind of blows my mind that not only am I a writer reporting on Justin Timberlake after spending most of my tween years bopping along to him and his boy band, I'm also talking about his son. Seriously, it's amazing enough to watch Timberlake still rock it out, especially at Super Bowl LII on Sunday, but to think about his little guy watching dad do his thing? So surreal. But is Justin Timberlake's son at the Super Bowl? He may be just a little thing, but guys, this is a huge deal.

It's no secret that Timberlake is head over heels in love with his little boy. Born in April 2015, according to People, Silas is just about 3 years old and considered one of the cutest celeb kids. (The source for this info is just me. I think he's the cutest.) But he's starting to become more than just Timberlake's son — apparently he's also Timberlake's music partner. Elite Daily reported that in Timberlake's newest album Man of the Woods, little Silas is heard on the last song, "Young Man" saying, "I love you, Daddy." I know. Too precious for words, right? But does that mean Silas would make a surprise appearance at the Super Bowl? Would his cute little face replace the wardrobe malfunction the rest of us have burned into our brains when we see Timberlake at a Super Bowl?

Early on in the game, little Silas hadn't been spotted yet, and Timberlake nor his wife Jessica Biel had spoken publicly about whether their son was going to be at the Super Bowl. But, one Twitter user shared photos that look like little Silas was there during his dad's rehearsal. It's not obvious if these photos are totally legit, but if they are, it's safe to assume Silas was in Minneapolis.

Some fans even wondered if he would join his famous dad on stage. He didn't appear on the stage, unfortunately, and he likely won't make it onto any football field either. At an NFL press event earlier this week, Timberlake spoke about his son and football, telling reporters that "he will never play football," reported Fortune. While it's obvious that football gets a bad rep with a lot of parents as a result of the life-threatening injuries and traumatic brain injuries, Timberlake had another reason why he wouldn't sign his kiddo up for football: he just wants his kid to be a good person.

“And, if he wants to get into the arts or sports, then yeah, I would fully support that. I think I can hopefully offer him some advice on what to do and what not to do ... but right now we’re working on our manners. That’s a big deal in our house right now," he said.

Ah. Manners and almost-3-year-olds. Been there, my friend. (Biel and Timberlake and I are all friends, obviously.)

If Silas did attend the Super Bowl, however, he followed in the steps of lots of famous kids and their mega talented parents. At the recent Grammys, there was plenty of talk about Pink bringing her young daughter Willow to the awards show, and even Beyoncé had to hold a juice box and snacks for Blue Ivy in the front row. One can only assume that Jessica Biel attended the Super Bowl to support her husband, which gives another good reason for Silas to attend. But you know, if they weren't willing to screw up the bedtime routine, I get it. Pop icon dad or not, even celeb kids have to get plenty of sleep, and something tells me Mom and Dad were up for awhile Sunday night.

But hey, if I spot Silas in the stands, I hope I see Biel sitting next to him, drinking her favorite beer and sharing a plate of nachos. What better way to watch the Super Bowl?