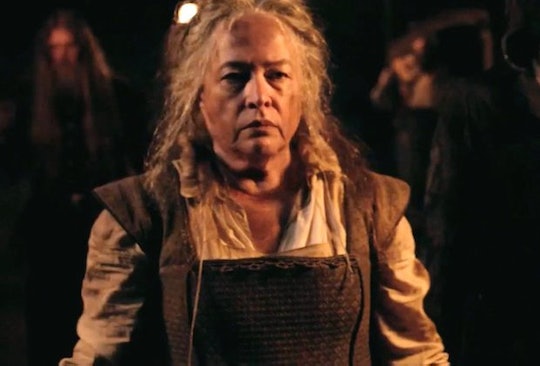 Is Kathy Bates' Character Real On 'American Horror Story'? She Might Be A Lost Colonist

American Horror Story is in its sixth season, and so far, we've dealt with five seasons of mystery, murder, and questions after each episode, so Season 6 should be no different. But when Shelby gets lost in the woods at night (was it really necessary to go that deep into the spooky forest?), she comes across what looks like a human sacrificial ceremony headed by a scary looking Kathy Bates. So, is Kathy Bates' character real on American Horror Story?

Just like the characters of Matt and Shelby, it's easy to wonder if the woman played by Bates, who is wearing ratty clothes from the 1500s, is real. And just like Matt and Shelby, there's little way to know for sure. But judging by her clothes and the fact that when she speaks, she refers to the area around them as a colony when she says, "I protect this place. I shall stop at nothing to hold safe this colony" make it seem like she's definitely from another time. If this season of American Horror Story is referring to the Lost Colony that it has all been confirmed to be using as its basis, then Bates' character is based off one of the women settlers from England who'd disappeared, along with the rest of the colony, in the late 1500s.

The story of the Lost Colony, to sum it up, goes that a group of about 100 English settlers arrived in America on the east coast in the late 1500s and set up a village on Roanoke Island, where the modern day Outer Banks are in North Carolina. One of the founders, John White, returned to England for supplies but wasn't able to come back to America for a few years. When he did make his way back, the village was deserted and all signs of his family and friends were gone. It became known as the Lost Colony, because the fate of the lost colonists has never been confirmed, so when on American Horror Story: Roanoke, Bates' character was seen for the first time, looking like a 14th century Englishwoman, albeit in worn and dirty clothes, it added to the possibility that this season of American Horror Story is about the Lost Colony and Bates plays an important figure in it.

When John White left Roanoke Island, he left behind a wife, daughter, and a granddaughter, the latter of whom had been the first child born in their new colony in America. Bates' character on American Horror Story: Roanoke could be any one of these female figures, who were important in their own ways. And if she is one of them, then it would make sense for her to be so protective over the land her family had died on several hundred years ago.

Unfortunately, there's not much of a way to tell if Bates' character on American Horror Story is real or just an intricate creation thought up by Ryan Murphy, but it's very possible that she's a little bit of both.