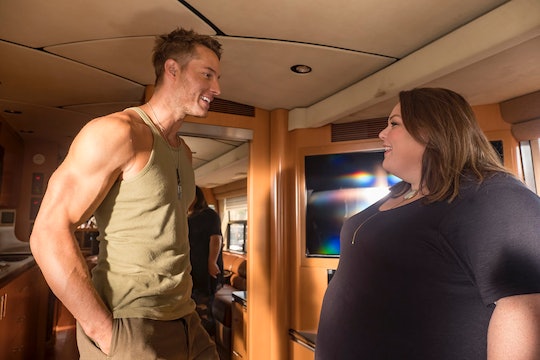 On Tuesday’s episode of This Is Us, there were enough flashback scenes to make you a blubbering mess before the episode even hit its halfway point. But it also touched on some important aspects of Kevin’s personality, which might include addiction. And after taking pain pills at the end of the episode, some viewers may find themselves wondering: is Kevin an addict on This Is Us? Kate’s remark about him being just like Jack could mean more than you think.

So far in the series, Jack’s alcoholism on This Is Us has been a big plot point for his character and the impact its had on his relationships. Part of that was probably to humanize him as a character and show viewers that, in addition to being the best dad on TV ever and the husband of the year, he too had his faults. So what does this have to do with Kevin? Normally, This Is Us flashbacks tend to parallel or connect in some way with what's going on in the present day for these characters. So it's interesting that Tuesday's episode — which focused so heavily on Jack struggling to get sober — coincided with watching Kevin struggle with his own demons as well.

The final scene, in particular, caught my eye. Kate got off the phone with Kevin and looked over at Jack's urn, remarking that Kevin is so much like him. And while she could have been referring to her brother and father’s shared stubbornness, it may have been in reference to something even deeper than that, especially since it showed Kevin taking a pain pill for his on-set leg injury immediately following her comment. Is this supposed to signify that Jack and Kevin's storylines are somewhat related?

Initially, I took Kate's remark as simply an acknowledgement that Jack and Kevin have similiar personalities, but after watching the scene over again, I'm not so sure anymore. It even looked like Kevin hesitated a second before taking the pain pill, as if he wasn't sure if it was a good idea, which gives me reason to believe that he might have an addiction of his own.

Not to mention the fact that Kevin has always harbored his own insecurities, as both a kid and as an adult. Whether he was jealous of attention given to Kate or Randell over himself or unsure about his acting skills, Kevin’s insecurities have always seemed to play a role in who the character is. It’s possible that taking pills became his way of self-medicating to deal with those insecurities on his own. Especially since, as he told Kate, he isn’t ready for therapy or to talk about his feelings regarding Jack.

If Kevin is an addict on This Is Us, it will no doubt be a big hurdle for the character to overcome. But all of the little stressors throughout the episode that intertwined with Kevin’s own memories of Jack could have been meant to signify Kevin’s own present day struggle with addiction, even if he doesn’t realize just yet that he has one.

Because of Kevin’s own underlying issues he has yet to deal with and the fact that Jack was an alcoholic, there’s a chance that the tendency for addiction was passed down to him in a roundabout way. According to the June 2008 issue of Monitor on Psychology, researchers found that there is a link between addiction and genetics, but in most cases, it’s not as cut and dry and you might think. Nora Volkow, MD, director of the National Institute on Drug Abuse told the publication that the amount of the dopamine receptor D2 that people have is partly determined by genetics and that in time, it might be used as an indicator to tell if an individual might become addicted to alcohol, cocaine or heroin.

But, Volkow added, the person would first have to experiment with said drug more than once themselves before they would show any signs of addiction. If that is the case with Kevin on This Is Us, then there is a chance he may be on a similar path Jack went down in regards to alcohol.

So far, Jack’s been able to get a hold on his own issues with drinking, so there’s no reason to suggest that Kevin won’t be able to do the same if he's an addict as well. But his path to recovery, while still struggling to deal with his unresolved emotions regarding his dad's death, isn’t going to be easy. But I am completely confident that the show will do a fantastic job with addressing such an important topic — and make us cry nonstop along the way.