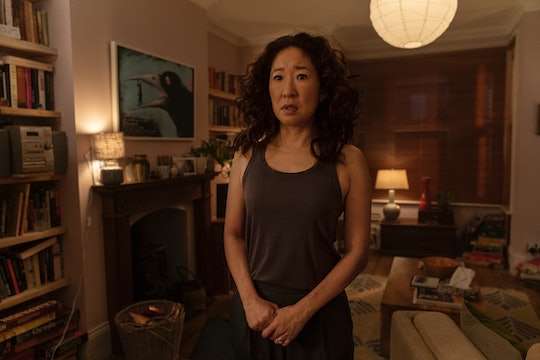 If you are one of the millions who have "cut the cord" and prefer to stream your favorite TV shows online rather than through an official cable provider, you might find yourself late to the game for some shows. Killing Eve, for example, hit Hulu after Season 1 aired on BBC America in its entirety and if you are just now catching up to the the suspenseful series, you might be wondering if Killing Eve Season 2 is on Hulu yet.

The fact that Season 1 is on Hulu means there is hope for Season 2 to drop on the streaming platform at some point, but Hulu hasn't made an official announcement either way. In fact, when Hulu did release Season 1 of Killing Eve, it was after it has already aired on TV, so there’s a chance it could follow the same schedule this time around.

Killing Eve Season 2 just premiered on BCC America and AMC on April 7, so it won't conclude until at least the end of May. And if it then moves over to Hulu, fans could still be in for a wait. Season 1 wrapped on TV last May but didn't drop on Hulu until December 2018. If the same schedule is followed this time around, that means Season 2 might not be on Hulu until December of this year.

Luckily, Killing Eve Season 2 will more than likely drop on Hulu after the Season 2 finale airs on TV, even if fans will have to wait for it. In 2015, Hulu signed a licensing deal with AMC, granting Hulu the exclusive rights to stream original content from AMC, BBC America, and a variety of other networks under AMC Networks’ name. So although Killing Eve Season 2 isn't on Hulu right now, there is a good chance it will show up later this year.

After the show’s inaugural season was nominated for a Golden Globe this year and Sandra Oh won for Best Actress in a Television Drama, it was clear that despite being aired on BBC America only, it had already gained enough traction to deserve a wider release. That’s likely why AMC Networks extended Killing Eve to the actual AMC flagship network so that Season 2 will air simultaneously on BBC America and AMC.

AMC Networks Chief Operating Officer Ed Carroll told the Los Angeles Times that the shared network idea was thought up to bring even more fans to the already popular new series and so far, it seems to be working. "It’s a great opportunity to expose more people to Killing Eve," he said. "These times demand trying some non-conventional methods. And if you have a platform as big and broad as AMC, then it seems like a good thing to try."

Killing Eve Season 2 picked up literally seconds after the intense Season 1 finale and according to The Wrap, it has continued to draw in an increasing number of viewers. Because of its simultaneous broadcast on BBC America and AMC, it brought in a combined 1.2 million viewers for the premiere, which is more than double the amount of viewers it averaged per episode last season. Killing Eve was also already renewed for Season 3 well ahead of its Season 2 finale, so the interest is clearly there.

It’s possible that, in the future, Killing Eve will be available on Hulu much faster than months after the preceding season airs live on TV, but for now, that’s the way it has to be. You can catch up on Season 1 on Hulu right now, but once you’ve powered through that, it will be a waiting game for Season 2.

If you have access to cable network login information, you can watch Killing Eve by streaming AMC on demand. Or, if you have Amazon Prime, you can pay for each Season 2 episode individually after they air. But if you are waiting for Killing Eve Season 2 to premiere on Hulu, you probably shouldn't hold your breath. And because it probably won't drop until later this year, I would try to avoid spoilers at all costs.