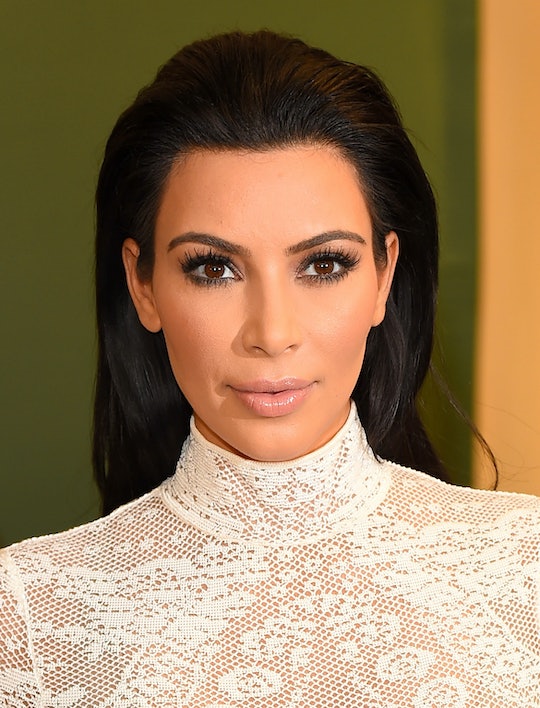 Is Kim Kardashian At The VMAs? She Has An Award To Present

Obviously the celebrities we expect to show up to the VMAs are mostly of the music artist or otherwise A-lister variety, but that's not to say that the wives of rap gods (read:the self-proclaimed kind) aren't also included in those expectations. Especially when they happen to be Kim Kardashian, who has always been a celebrity in her own right. So is Kim Kardashian at the VMAs this year? We all expected her to show since Kanye West was reportedly given four minutes to do whatever he wants on stage at the VMAs, so it was no surprise to see her on the red carpet before the show.

West nominated for Video of the Year and Best Male Video, so that alone warrants a little spousal support from Kardashian. Not only that, but maybe Kardashian wants to be on hand to support or even have a hand in any "Famous" feud reference that West makes during Taylor Swift's absence at the VMAs. And that alone is a terrifying and amazing thought.

It was also no surprise to see that Kardashian would be present and accounted for this year at the VMAs because not only is her husband set to take the stage and be totally unpredictable, as per usual, but Kardashian herself is scheduled to be presenting at some point. Since West has his own role to play in the awards show this year, the idea of Kardashian presenting leaves the question of whether she'll be saying anything with those ballsy loose lips of hers, a la the whole "Famous" debacle with Taylor Swift and West in yet another feud.

If you aren't hip to the latest Swift/West-gate, the gist of it is that West had a phone conversation with Swift, wherein he appears to ask for her permission to mention her by name in his song, "Famous", and through the cordial and friendly conversation, it sounds like she's totally on board. Of course little does she know that Kardashian is recording this conversation and plans to later post it on the internet as proof that Swift's eventual gripes about "Famous" aren't consistent with the conversation she had previously had with West himself.

So it isn't totally out of the question to think that when Kardashian is on stage at the VMAs, we'll get something similar to that time Nicki Minaj called out Miley Cyrus with a snarly, "Miley, what's good?" Now, we like to think Kardashian isn't that confrontational, especially when she's on the stage with a job to do, but Kardashian showed up to the VMAs this year, so the hard part is over.

Now we just need to see if she'll follow in the footsteps of her unpredictable but genius husband and say a few lines of her own that are totally off what the teleprompter tells her to do. Because that's what the VMAs is all about. We tune in for the music, but stay for the promise of that sweet, sweet drama.