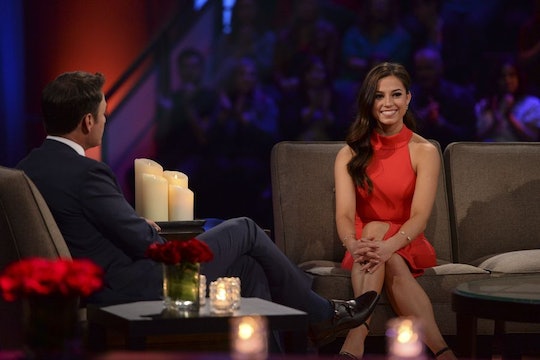 One of the favorite women from this season of The Bachelor was easily Kristina, who bravely told her story of adoption and leaving her home country of Russia as a child. When Nick sent her home, she tearfully told him that he didn’t give her a fair chance and while that may be painfully true, her life outside of The Bachelor seems to be full of love regardless. But is Kristina dating anyone after The Bachelor?

The former contestant’s social media accounts don’t say anything about a new romance, but they are full of her girlmances with all of the friends she made while filming and that’s even better. Even on the show, Kristina wasn’t catty, territorial, or even mean. In fact the only time there was any drama with Kristina (and this is miniscule at that) was when she confronted Corinne about her behavior with Nick and how the other women viewed it.

But even then, Kristina was totally civil and classy. And honestly, she was sent home way too early. Granted, it didn’t seem easy for Nick to do at the time, but millions of hearts broke when he broke Kristina’s. If Kristina from The Bachelor is dating anyone now, she’s keeping it a huge secret, but I kind of love the love she’s been giving to her former fellow competitors.

When Kristina isn’t hanging out with some of the women from The Bachelor, she’s tweeting about their phone conversations and making you extremely jealous of the very real friendships they built while on The Bachelor. If you didn’t already love and admire Kristina, there’s no getting around it now.

There are a few photos on Kristina’s Instagram from her time getting to know Nick and legitimately enjoying the experience (or journey, if you will), but it seems like she’s benefited a lot more from the friendships she made rather than the love she lost. It happens a lot: the women of The Bachelor end up forming real bonds and almost none of it is shown once the episodes are edited down.

I get it — there’s no drama in showcasing the awesome friendships that blossom between women who are supposed to be clawing each other for a rose, but the fact that these friendships even exist means that The Bachelor can be about more than just finding romance.

Although Kristina’s social media accounts don’t show a woman in love or attached to a boyfriend right now, it doesn’t necessarily mean that she’s single. She could just be really good at hiding that part of her life. But to be totally honest, Kristina found tons of new BFFs on The Bachelor and that is one thing she is all about flaunting, and it just makes her that much more lovable.

Luckily, Kristina will be back on the Bachelor Women Tell All special Monday night. She probably won’t throw too much shade Nick’s way, but overall he’s going to have a lot of explaining to do, so she has every right to say what’s on her mind.