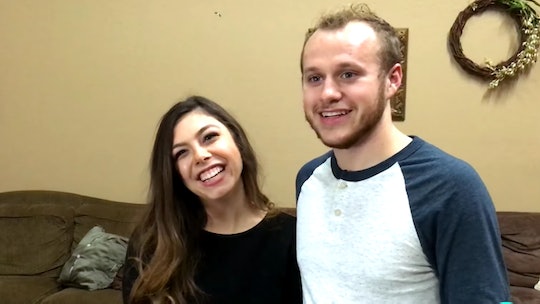 Josiah Duggar Is On Social Media, But What About His Fiancée Lauren Swanson?

Among other things, the Duggar family is known for its rules — and lots of them. One of them focuses on social media use and when the kids can use it, typically not until after getting engaged or marriage. But even though 21-year-old Josiah Duggar is not yet married and has only been engaged a short while, he's been on Instagram and Twitter for years now. But what about his bride-to-be? Is 18-year-old Lauren Swanson also on Instagram or any sort of social media?

As it turns out, it looks like she follows the Duggar family rules more than her fiancé. For the Duggars, social media is viewed as a dangerous, tempting place. But the thing is, Swanson is still a Swanson. So, technically, she's allowed to have social media, unless she follows her own family's set of rules. But, it doesn't really look like she wants to enter the world of Instagram, Facebook, and Twitter. Currently, there are no public, official social media accounts linked to her, and any photos of her on Duggar's Instagram page don't have her tagged in them.

For now, it seems like Swanson is social media free, although she might decide to make a change soon. In the Duggar world, as previously mentioned, social media is off limits until you're engaged, so perhaps now that she and Duggar are engaged, Swanson will decide to check out social media for herself.

The truth is, plenty of Duggar children are avid social media users, so it wouldn't be surprising if Swanson got in on the action. Obviously, the right to her privacy is a totally understandable reason for wanting to stay offline. After all, being in the public eye is hard as it is, and now that she's marrying into the Duggar family, Swanson will learn first hand the kind of pressure that comes with that.

On the other hand, fans are basically dying to learn more about Swanson and who she is. With virtually no social media footprint, it's hard to learn anything about Duggar's bride. However, according to Duggar himself, she's quite the gal. In his Instagram post announcing their engagement, Duggar wrote, "The more time I spend with Lauren the more I realize how I can't live without her. There's no one else I'd rather spend my days and grow old with!"

Swanson is still a bit of a mystery to fans, something that's sure to end fairly soon, though. However, as TODAY reported, Swanson actually "made an appearance on an episode of the Duggar family's series 19 Kids and Counting back in 2010." But, it wasn't that important or significant of an episode, nor was it one in which Duggar fell in love with Swanson.

In fact, Duggar was actually in a courtship before Swanson, with a girl named Marjorie Jackson back in 2015. And interestingly enough, shortly after their courtship ended in August of 2015, Jackson posted her first photo on her Instagram page.

There aren't too many details out about Duggar and Swanson's upcoming nuptials, but the story of their proposal is pretty sweet. According to TLC, "He popped the question while visiting with Lauren and her family at their home in Georgia. In a sweet gesture, he proposed at the same spot where her own parents became engaged."

So, as fans wait for the moment when more info about Swanson and the happy couple is made available, it looks like Swanson will be lying low and keeping a low profile, aside from what Duggar shares about her. But, ya know, it's likely that once she officially becomes a Duggar, she'll start getting in on the social media game as well.