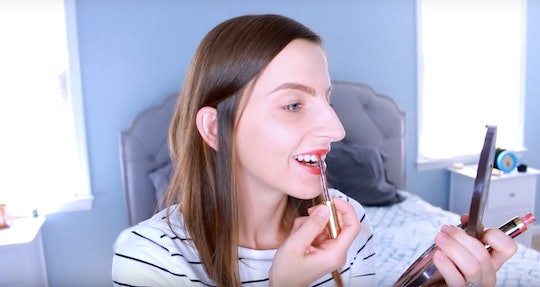 Here's What You Need To Know About Using LipSense While Pregnant

I'm not going to lie: I put on a bit of makeup before I went to the hospital to give birth. When my water broke, I still had zero contractions, and, although I don't wear makeup on a daily basis, I figured: why not look good when I meet my daughter? Of course, I couldn't have cared less about that when I first met her, but it was worth a shot. But recently a pregnant friend said she was wearing her latest beauty obsession, LipSense, "into the delivery room!" and I wondered: Is LipSense safe to use while pregnant?

When it comes to the general safety of using LipSense, some experts say the cause for concern comes from certain ingredients — like Retinyl palmate (vitamin A), Hypericum perforatum L. (St. John's Wort), and propylene glycol (an ingredient in antifreeze, paint and electronic cigarettes) — that are found in many LipSense products. "All of the ingredients mentioned potentially can cause problems to a developing fetus," Dr. Idries Abdul-Rahman, who hosts Twin Doctors TV with his brother Jamil, tells Romper in an email interview.

Abdul-Rahman explains that, for instance, when ingested in high quantities (usually more than 10,000 IU per day), Retinyl palmate can cause fetal anomalies including facial, cranial defects, and bone abnormalities. "In all likelihood, these levels would never be reached using a topical substance like a lip balm, but the theoretical risk does exist," he says.

As for St. John's Wort, Abdul-Rahman says that it isn't necessarily unsafe for use during pregnancy, but it hasn't been sufficiently studied so healthcare providers cannot make a definitive statement on its safety, or lack thereof. When it comes to propylene glycol, Abdul-Rahman notes that while it is an alcohol that the body usually metabolizes, the ability to do so is reduced in both pregnant women and babies, allowing the substance to accumulate and potentially cause kidney damage. "Again, with a topical systemic absorption [the effects] would likely be minimal, but there is no well known or studied threshold, so we cannot recommend it," he says.

In addition to LipSense, it won't hurt to give all of your cosmetics a once over before using them during pregnancy. According to Fit Pregnancy, many of your favorite lip glosses, blushes, and creams include harmful ingredients that shouldn't be used when you are growing a tiny human, and even when breastfeeding.

"We encourage all of our mothers-to-be to check the ingredient list of all cosmetics and topical substances they are using," Abdul-Rahman says. In addition to those mentioned above, he recommends pregnant women steer clear of these ingredients: benzoyl peroxide and salicylic acid (found in many acne creams and washes), hydroquinone (found in many skin lighteners), parabens (a preservative found in many cosmetics), aluminum chloride (found in antiperspirants), toluene (found in nail polish), phthalates (found in fragrances and nail polish), and oxybenzone and avobenzone (found in chemical sunscreens).

Abdul-Rahman says pregnant women who are seeking to go natural should even be careful with certain products, like essential oils. According to Rodale's Organic Life, lavender, ylang ylang, and chamomile are safe to use during the second trimester and experts say to avoid all essential oils until the second trimester. But there are several, like cinnamon, rosemary, clary sage, and jasmine, that could cause preterm contractions and other issues.

Self care is important when you're pregnant and even still when your little one arrives — although it may be hard to come by. But before you indulge in the latest lip balm or lotion, be sure to give the label a once over and talk to your healthcare provider about any questionable ingredients. It might seem tedious at first, but, like everything you will triple check throughout parenthood, it will eventually become second nature.