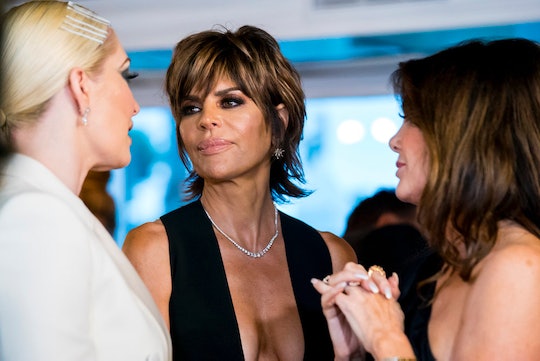 Here's Why Lisa Rinna Needs To Return For 'RHOBH' Season 9

If The Real Housewives of Beverly Hills Season 8 reunion has taught us anything so far, it’s that that show probably wouldn't be the same unless Lisa Rinna was there to continue stirring up trouble among the other women. And since she’s been a big part of the show for the past several seasons, it would make sense for fans to wonder if Lisa Rinna will return for RHOBH Season 9? Whether you love her or hate her or love to hate her, I’m not sure if you can have a season without Lisa at this point.

So far, Lisa hasn't said anything concrete about returning to the series next season, but as Variety reported back in April, RHOBH has already been renewed for Season 9, so with that in the bag for Bravo, there's no reason to think that Lisa won't return along with it. Of course, she might not be everyone’s favorite co-star right now, especially as she recently took credit for carrying the show when speaking to Andy Cohen on his Siriusxm show, Radio Andy. The RHOBH star opened up about Season 8 and claimed that while Lisa Vanderpump and Kyle Richards are two of the highest paid stars on the show, it was she who actually brought the best storylines and drama this season.

Overall, Lisa isn't totally off base with her claims about bringing drama to RHOBH, though. In the past, she’s been one of the more outspoken women on the show, and that’s really saying something. From flat out asking Dorit Kemsley about doing coke to her feud with Kim Richards, Lisa has never really been far from drama. That being said, since the whole point of shows like the Real Housewives franchise is to bring the drama and intrigue, she should still be a big part of the series when Season 9 kicks off.

It’s especially telling that Lisa also hasn’t said that she isn’t going to be back for RHOBH Season 9, which you would expect to be a big announcement if she had decided to step away from the show for the first time since becoming one of the main cast members in Season 5. She apparently attended Coachella with two of her co-stars from the show, so despite any drama from the past, she probably doesn't have bad blood with all of the women, which again, means that she likely feels plenty comfortable returning for more episodes.

In addition to appearing on RHOBH as a series regular, Lisa also has a clothing line that she promotes on QVC. In the past, she’s also appeared on TV shows like The Middle and has gone back to Days of Our Lives after being away from the soap opera for years. So even with such a busy schedule, Lisa could probably still fit into RHOBH. Every couple of seasons, there may be a new cast member or a new guest star who appears, but for the most part, the core cast members have stuck around for the long haul. Rinna hasn't said otherwise yet, so if the reality TV gods are listening, then she won't be going anywhere anytime soon.

The drama and inevitable feuds are par for the course when it comes to RHOBH, so barring any serious change in the cast or in Rinna’s career, there’s a very good chance that she’ll be back for a ninth season, along with the rest of the cast that fans already know and love.