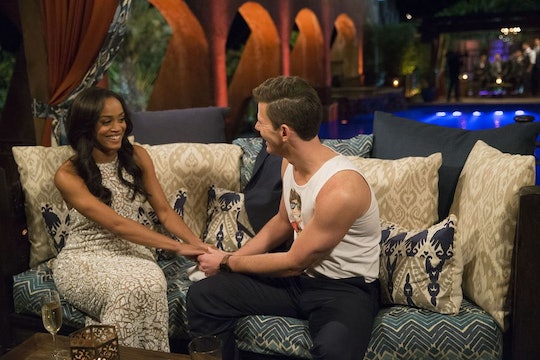 Lucas' Dating Life After 'The Bachelorette' Is Unclear

When Blake E. revealed that he already knew Lucas from a reality dating show, it was honestly no huge shocker for most Bachelorette fans. Because if there’s one thing we know about the whaboom guy, it’s that he loves attention and being at the center of it. And since it’s pretty much a given that he’s not going to end up with that final rose at the end of the season, is Lucas single after The Bachelorette?

He definitely likes the ladies, as evidenced by his time on the reality show Ex Isle and also the photos on his Instagram. I wouldn’t call him a ladies’ man (in fact, I refuse to), but he definitely does seem like he wouldn’t say no to some female attention at any given time. Especially if it’s because of his whaboom movement. It’s seemed like his time on this season of The Bachelorette has been more about getting attention and camera time rather than spending time with Rachel, the Bachelorette herself.

But even so, on Lucas’ Instagram he recently posted a photo from a charity event in Las Vegas with a dozen different women from last season of The Bachelor and he definitely looked comfortable.

I wouldn’t say that necessarily means anything since it was a Bachelor Nation-related event, but it also doesn’t look like Lucas is seeing anyone. Though something tells me that’s how The Bachelorette’s whaboom guy prefers it. Even before Season 13 of The Bachelorette premiered, there weren’t any telltale photos floating around to prove that Lucas was seeing anyone prior to coming on the show. He honestly seems too much into whaboom and running his company, YKnotWorld Productions.

In October, Lucas also apparently had a wild weekend in Las Vegas (note the scruff instead of clean shaven face) and appeared in a photo with his arms around two beautiful women. I doubt either of them were his girlfriend at the time or even now, but it definitely shows how much Lucas apparently enjoys getting his flirt on. And it further proves that whaboom guy is probably single after The Bachelorette and playing the field.

Before Lucas was crying out “whaboom” any chance he gets, and confusing and putting off Ashton Kutcher on The Bachelorette, he was on the reality dating show Ex Isle, where he got cozy with a couple of different women.

That was at the beginning of 2016, but it looks like between then and now, Lucas has stayed single for the most part. Unless he covered his tracks and deleted any evidence of a relationship prior to going on The Bachelorette, Lucas is single now. There’s only so much energy to go around when you’re the whaboom guy.