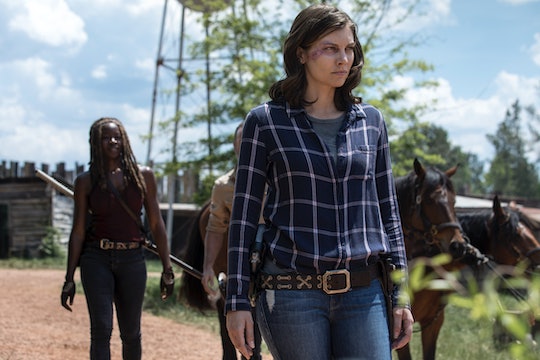 It’s been a while since Negan has killed on The Walking Dead, but ever since he brutally murdered Glenn, Maggie has been looking for a way to get her revenge. With Rick’s life hanging in the balance and keeping him out of the way to stop her, is Maggie going to kill Negan on The Walking Dead? Some fans might agree that his death is long overdue, but if the comic books are any indication of how the inevitable showdown will go, they might be in for a bit of a letdown. Warning: comic book spoilers ahead!

In the December 2017 issue #174, "A Solitary Life," Maggie finds Negan years after Glenn’s death and confronts him about his murderous rampage. But this is a different Negan, living on a farm by himself and quietly mourning the loss of his long dead wife, Lucille. When Maggie confronts him and reminds him of the life he’d once led and the fact that he beat Glenn to death with his barbed wire wrapped bat, also named Lucille, he takes responsibility for his actions. He even apologizes for his crimes. And in the end, Maggie decides to let him live with everything he’s done. At one point in the comic, Negan begs Maggie to end his life for him, but she walks away without killing him.

If the show follows the same route, Maggie could decide to let Negan live with his own guilt instead of killing him. It isn’t unlikely for the show to mirror the comics in this way since they’ve followed the comics in the past. With Carl’s eye being shot and his eventual death and Glenn’s murder, there's plenty that the show has adapted from the comics.

Negan could go down a similar path in the show, so Maggie could spare his life instead of getting her long-awaited payback. In Sunday’s episode, "The Obliged," Negan’s last scene showed him crying for Lucille. It’s unclear if he was mourning his bat, his wife, or both, but it sounds similar to the way he’s portrayed in The Walking Dead comic years after the events happening in the show right now.

Daryl told Rick that Negan is past the point of redemption and I’m not sure myself if he deserves a chance to reform himself, but it’s possible that being locked up with no one and nothing has forced him to face what he’s done. And Maggie could see that herself when she confronts him about it with the intent to kill him.

Jeffrey Dean Morgan (Negan) told Us Weekly that there will be an upcoming reunion between Maggie and Negan, though he didn't mention if it ends in bloodshed. "When they get together, it’s very intense. It’s very emotional," he revealed. "I think the audience is gonna get goosebumps. It’s very heavy."

Lauren Cohan, who plays Maggie, is about to join co-star Andrew Lincoln (Rick) as she exits the show this season, so that could be linked to her potential revenge arc with Negan. Whether she goes through with killing her or not, simply facing her husband’s murderer could be enough to make the new mom check out and give the actress her exit from the show.

Killing Negan could be an explanation as to why Maggie goes M.I.A. for a while when Cohan leaves the show. But in the same way, sparing his life could be enough reason for Maggie to want to pull back from everyone for a while. Whether Maggie gets revenge or leaves Negan to rot in his cell, a showdown is going to happen soon and it’s going to be epic.