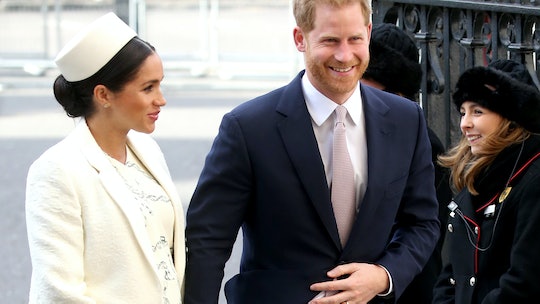 All eyes are on the Duke and Duchess of Sussex now that the royal couple is expecting a baby in Spring 2019. And with all the excitement in the air, TLC made Meghan & Harry: A Royal Baby Story, a one-hour special featuring everything you might want to know about the Prince Harry and Meghan Markle's baby. As the Apr. 9 premiere date approaches, fans are wondering how accurate Meghan & Harry: A Royal Baby Story really is. While accuracy may be up for debate, the feature gives individuals the opportunity to speak their own truth.

The TLC special will focus on everything in regards to Megan and Prince Harry's royal baby, from the moment Kensington Palace made the announcement that the couple was expecting to how the press has covered the pregnancy so far. According to a press release from TLC, the hour-long feature hopes to answer a few burning questions that fans have developed throughout the journey, including how Princess Diana's legacy may impact Meghan and Harry's parenting style and if Meghan's father will meet his grandchild.

To do so, the special draws on a number of interviews with people like royal correspondent Emily Andrews, Prince Charles' former butler, Meghan's half-sister Samantha, historian Kate Williams, and a range of journalists and authors who specialize in the royal family. However, it seems that the special will go without a perspective directly from Meghan and Harry, nor a statement from Kensington Palace, meaning that fans should be aware they may not be seeing the whole truth.

In the trailer for Meghan & Harry: A Royal Baby Story, it's clear that the film will examine the entirety of Meghan and Harry's baby journey, including Meghan's $200,000 baby shower and media scrutiny as well as hot topics such as rumored drama between Meghan and Kate and the situation with Kate's father.

In particular, the trailer featured a clip of Samantha, who has had a history of saying negative things about Meghan to the press. "You can't hurt people like this and then turn around and flip the script and play victim," Meghan's half-sister said in the trailer.

Although TLC did not confirm what Samantha was referring to, the clip came immediately after the trailer gave fans a glimpse of the family going on with Kate's father. So it's likely that Samantha is talking about Meghan and her family here.

Meanwhile, the trailer also cuts to the "rumored tension" between Kate and Meghan. "I don't think that Meghan and Kate will ever be super good friends," a woman said in the trailer.

Because a number of these hot topics are about the relationships between said individuals and may not deal with solid facts, it's almost impossible to determine how "correct" these opinions are, especially without the other side giving their own perspective.

Nonetheless, it seems that Meghan & Harry: A Royal Baby Story will be an overall positive experience. TLC's President and General Manager, Howard Lee, revealed that the network is excited to shed some light on Meghan's pregnancy for fans in the States.

"As the home of all things wedding, all things royal and all things family for viewers in the U.S., it makes perfect sense for TLC to follow this next generation of royals as they journey into the joys of parenthood," Lee said. "We’re excited to bring this special to our passionate fans."