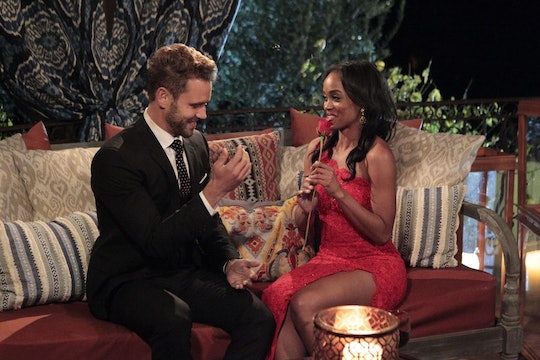 Nick Viall Could Still End Up A Bachelor

Although filming has wrapped for Season 21 of The Bachelor, the season has just begun and already fans are probably wondering: is The Bachelor's Nick Viall still single by the end of the show? The Bachelor star has been pretty good about keeping his social media game on the down low in recent weeks and most of his photos have been pretty family-oriented. But from a guy who has been down this road three other times, he's pretty good at keeping those Bachelor Nation secrets until they air on TV. Or, until he brings them up on After the Final Rose.

Nick recently spoke to Us Weekly and told the magazine that he "definitely found love," but that the journey to getting there was difficult, made up of hard choices and lots of nerves. "I don’t think there was an easy decision I made throughout the entire process," he said, and went on to admit that although it was nice to be the Bachelor this time, there were difficulties in being the chooser rather than the chosen.

But is Nick single now? The Bachelor star obviously can't let out too much too soon, so it's plenty possible that whatever love connection and proposal may or may not have happened during filming has fizzled out by now, but it's kind of hard not to wonder if Nick finally found love after all this time.

Since filming of The Bachelor ended, Nick has apparently been spending time with his family during the holidays and making the rounds on different talk shows and magazine interviews. But there are no social media clues as to whether or not Nick is single or actually engaged at long last.

Nick's Bachelor journey began on Season 10 of The Bachelorette when he made it to the final two with during Andi Dorfman's year. In the end, she turned him down and ended up choosing Josh Murray. Then, Nick came back to the show in Season 11 during Week 5 to compete for Kaitlyn Bristowe's love. And although he was permitted to stay and made it to the final two once again, he was ultimately turned down for a second time. Nick's most recent attempt at finding reality TV love was on Bachelor in Paradise Season 3, during which he started a fling with Jen Saviano, though that didn't end up working out.

With Nick as the Bachelor, you kind of have to assume that this is his last shot at finding love in any on-screen capacity. But this time, he is the outnumbered one as a couple dozen women compete to get a proposal from him. As some of the ads for Season 21 said, the fourth time's a charm, right?