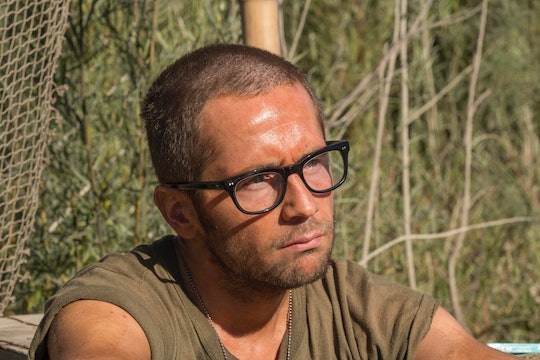 The Pearson family is about to grow by one and no, I'm not talking about the anticipated arrival of Kate and Toby's baby. At the end of the This Is Us fall finale, a man in a Bradford, Pa. entered a trailer and the camera panned to some mail addressed to Nicholas Pearson on it, which is the name of Jack's little brother. Fans last saw him potentially die in Vietnam, so is Nicky still alive on This Is Us? In some ways, it's a total soap opera trope (and part of the plot to Pearl Harbor). An assumed dead soldier returns years later to the shock of all of his loved ones. Though in this case, if the man in the trailer really is Nicky, he's outlived most of the family he knew before he was drafted.

I highly doubt the This Is Us writers would troll fans this hard, so there's a good chance that Nicky is still alive. Or, in a very This Is Us-like twist, this Nicholas Pearson could be a son of Nicky that no one ever knew about. This is total fan hopefulness and shameless theorizing on my part, but Nicky could have survived the explosion in Vietnam, made it to America where he lived out the rest of his life and had a son, and eventually died. The man in the trailer could be his adult son and, effectively, the cousin of the Big Three. Am I getting ahead of myself here? If it's possible that Nicky could be alive, then it's possible he had a whole family no one knew about.

Shortly after the jarring fall finale, This Is Us creator Dan Fogelman spoke to Entertainment Weekly about Nicky’s fate and it seems that either scenario is possible. Obviously he couldn't let out any spoilers or concrete clues, but he made it sound like something big is going to happen with the Nicky storyline.

"In terms of getting his brother back, there’s a story to come in the back half of the season, and we’ll see what that looks like and what that entails," Fogelman said. "But you can never have enough Pearson men, is what we say around here."

Fogelman also said that there's a "very specific story" about what happened to Nicky after the fishing boat blew up and that the story arc "will answer all of that relatively quickly." Whether Nicky is still alive or he had a son before Jack even made it back to the United States, it sounds like all will be revealed soon enough.

There's also a question of if Jack knew about Nicky or if he died thinking Nicky had died in the explosion. The last viewers saw of that day in Vietnam was Jack diving into the water to try and save his brother. It's possible that Jack just assumed him to be dead after not finding his body. Or, he helped get his brother out of the country after he realized how far gone he was.

Immediately after Nicky's draft number was pulled, Jack said he would drive him up to Canada to escape being sent overseas. It was a given that Jack would protect him, and if that means breaking all kinds of laws to help him fake his own death in Vietnam, I can see Jack doing that too.

Either way, the present day Pearson family is bound to meet whoever this Nicholas Pearson is. It would definitely be a fitting conclusion to Kevin's search for more information on Jack's past. And, like all things This Is Us, it can ignite a thousand more questions for viewers to obsess over.